Consumer Sentiment in the US Deteriorating

Consumer sentiment in the US has been deteriorating in recent months, as shown in the chart. The purple line shows consumer sentiment, where an upwards move signals increasing consumer confidence and a downward move the opposite. The shaded grey area indicates a recession.

The latest reading in February 2022 was 61.7, an 8% decline over a month, and a 20% decline over the year. Consumer sentiment in the US is now the worst it has been in over a decade – even worse than the pandemic – and the last time such a negative reading was registered was in late 2011. The University of Michigan cites a series of factors causing the recent decline in confidence, including: weakening personal financial prospects due to inflation; low confidence in the government’s economic policies; and the least favourable long-term economic outlook in a decade. This seems counterintuitive considering that the US economy appears buoyant. 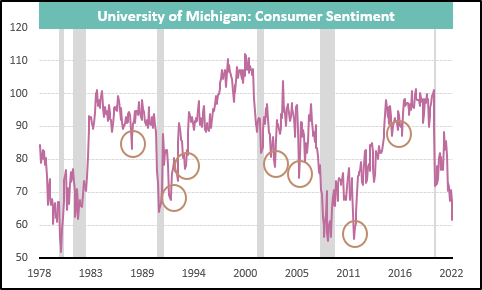 As we can see from the chart, the Consumer Sentiment Index has been reasonably good at predicting recessions – since 1978, there have been six official recessions in the US, and each one has been preceded by a deterioration in consumer confidence.

This is, of course, why we would look to see multiple leading indicators confirming each other, as this would enhance our confidence that a change in the economy was about to occur. We already highlighted that Dow Theory gave a ‘Sell’ signal on US equity markets in February and there are many other indicators used by investment professionals.

For GillenMarkets, while we like to use these indicators to understand what the market is saying, we have and will continue to base investment decisions not on timing indicators but on the fundamental medium- to long-term attractions of individual stocks and funds.

Nonetheless, we continue to track these indicators and communicate their readings on a regular basis to subscribers of our weekly newsletter.