Dow Theory for the 21st Century gave a ‘Sell’ signal on 22nd February last – triggered by the S&P 500 Index and one other of the Dow Industrials and Dow Transports indices closing below its secondary reaction lows of late January. The ‘Sell’ signal is telling us that the uptrend in US equity markets, which started in March 2020 and was confirmed by Dow Theory on the 6th April 2020, has now likely ended and a downtrend has begun. How long it lasts, how deep it will go, and when it will end is not knowable in advance. It is worth remembering that the Dow Theory indicator has a good, but not perfect, track record of calling major changes in up/downtrends as they occur (i.e. changes in the primary trend of the US equity markets).

One unusual aspect of this ‘Sell’ signal is the level of bearish (negative) sentiment that comes with it.

The market is just a collection of buyers and sellers. If there are more buyers than sellers, prices begin to rise. This feels good, naturally, and invites more buying. Prices rise again. This process repeats itself (with bumps in between!) until finally the last buyer has gotten involved. At that point, there are no more buyers at the higher price, and so sellers begin to outnumber buyers. The process will begin to gradually reverse itself and prices will begin to fall. 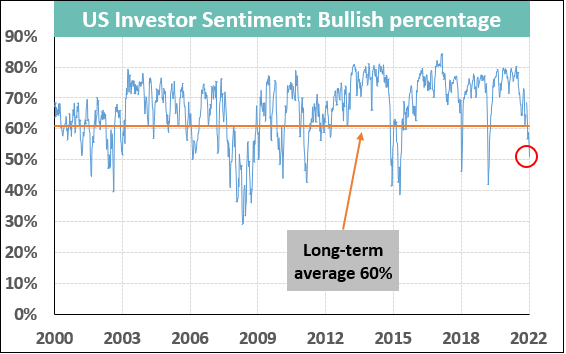 In simple terms, Dow Theory tries to identify when buyers are just beginning to get the upper hand (the start of an uptrend), or sellers (the start of a downtrend).

However, for the latest signal, bullish sentiment fell in advance of the Sell signal – highlighted in the chart on the right which shows that of investment advisors in the US market, 31% of them are bearish and 32% are bullish, a near 50:50 split between the two. While this is not the lowest measurement on record, it is surprising as it suggests that the market has been bearish for quite some time while markets did not fall in correspondingly sharp measure.

As always, reading the market tea leaves is tricky, and this time is no different.