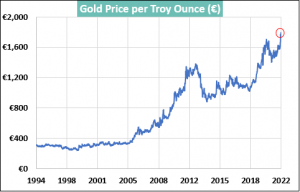 The gold price has failed to break to new highs in dollar terms but it is at new highs against several other leading currencies – including in euro terms.

A stronger dollar can be a headwind for the gold price simply because gold is priced in dollars. And the dollar has been benefitting from safe-haven status of late but also reflecting the fact that US interest rates are rising ahead of other developed economies like the Eurozone, Japan and elsewhere.

The principal concern for investors today is likely the level of global debt which is more than double the levels going into the Global Financial Crisis. When compared to global GDP, which is also higher today compared to 2008, debt levels have not doubled, but they are worryingly high nonetheless, especially as many countries continue to add significantly to their debt as fiscal deficits are the norm and likely to continue.

Interest rates are on the rise in the US in response to higher inflation but can interest rates be lifted enough to quell inflation and without causing a recession. If lifting US interest rates, for example, to 3.0% causes recession then the line of least (political) resistance will be either to reverse the interest rate rises – in which case they will likely remain below inflation – or for governments to start printing more money (again) to finance the likely continuing budget deficits, which would lift debt levels even further.

In our view, many economies around the world are now between a rock and a hard place. That risk is most likely what is underpinning the current gold bull market.