The Origins of Netflix

We introduced coverage of Disney recently, and as part of our analysis of its Direct-to-Consumer streaming business, we also looked at one of its key competitors, Netflix.

Netflix was founded in 1997 in California, USA as a mail-based rental business focused on DVDs, initially offering a per-rental model for each DVD but quickly transitioning to a monthly subscription concept in 1999. Management focused on a business model of flat-fee unlimited rentals without due dates, late fees, shipping and handling fees, or per-title rental fees.

It was not until a decade after its founding, in early 2007, that Netflix announced its push into video streaming, introducing video-on-demand services via the Internet. It was management’s belief that the consumption of video content would eventually transition towards streaming – quite the move when you consider that the first iPhone was only launched in 2007, Smart TVs were far from commonplace in people’s homes, and poor-quality internet connections limited streaming quality. 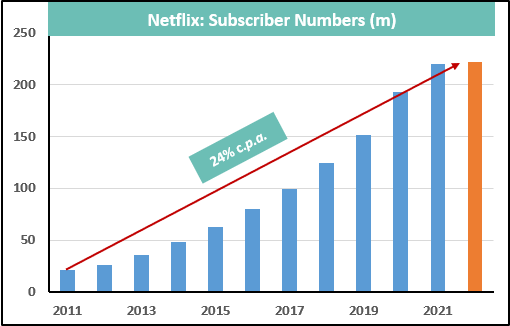 Starting in the US, Netflix began its expansion into Europe in 2012 and the service is now available in 190 countries worldwide. Since 2011, subscriber numbers for Netflix have risen by 24% per annum to 222 million today and revenues are a massive $31 billion annually. Netflix’s success has been driven to a large extent by its huge success in producing hit content – Stranger Things, The Witcher, House of Cards, Bridgerton and Squid Games are all Netflix originals.

Currently, the highly competitive streaming market is at an interesting juncture. Competition has massively increased, with many firms now operating in the space, including Netflix, Prime Video, Disney+, Apple TV, Hulu, and Paramount Plus. In order to attract and retain subscribers, platforms are investing huge amounts of capital in producing new content. This new content is expensive to produce and, by definition, success is uncertain. The “hit-based” nature of TV programming means that the majority of content will flop while only a few shows will become huge successes. It is similar to drug development – most drugs don’t make it to market, but the ones that do more than compensate for the ones that don’t.

Add to this the probability of a recession – with cash-strapped households cutting back on discretionary spending – and rising interest rates, and it is no wonder that stocks like Netflix and Disney have been selling off lately! It is a tricky backdrop to operate in, and success is far from certain – although, for what it’s worth, Disney+’s huge library of historic content and Netflix’s demonstrated track record of creating “hits” are significant competitive advantages.

This article is an abridged version of one that appeared on the GillenMarkets website. We regularly write detailed features on interesting companies for subscribers which allow both us and our readers to learn more about business and investing. Subscribers to our website get full access to these articles, as well as the latest insights on markets, in-depth research into stocks and funds, and model investment solutions for DIY investors. If interested, you can click on the link above for more information, or email info@gillenmarkets.com to arrange a free trial.