An Introduction To Understanding & Investing In Bonds 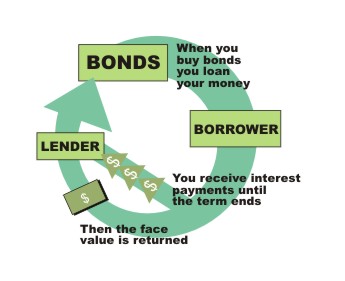 Have you ever heard of the bond market, or the “Irish ten-year bond yield” or “inflation linked bonds” or “fixed income” and wondered what on earth all of this meant? Here is a short introduction.

What is a bond?

A bond is, in fact, a loan. When you hear about the “national debt“, people are talking about bonds issued by the government. There are also “corporate bonds”, issued by companies.

When the government needs money but doesn’t want to raise taxes, they simply borrow it. To do this, they create a security (a product which can be bought and sold on an exchange). Instead of turning to one entity (another government, a Central Bank, an extremely wealthy individual), saying “Hello! We need €5 billion. Could you lend it to us?“, they break up the €5 billion total into smaller shares and those bits of a bigger debt are sold on an exchange.

Whoever buys this security on a stock exchange is, in effect, lending money to the government.

This, in essence, is the definition of a bond: it is a loan of money that is traded on an recognised exchange where buyers and sellers meet and trade the bonds in the “secondary market”. Not all bonds are traded on stock exchanges. Bonds can also be held privately until maturity.

Now of course a loan has to be repaid – with interest! Without interest, nobody would be “interested” in lending this money… The government will issue bonds, clearly stating  their maturity date (ten-year, thirty-year bonds) and the interest they bring.

If you own a government bond, the government has agreed to pay you back at a certain date with a certain amount of money.

The fact that many bonds are traded on an exchange means that you can see the prices of these securities on the stock exchange: how much it costs for example to buy Irish ten-year bonds. You could even buy a ten-year bond one or two years into it.

Bonds are for investors who are happy to exchange upside for price certainty. If you buy a stock, there isn’t any cap on the price that it could rise to. But as a lot of us experienced recently, the price of a stock could also fall significantly!

On the other hand, with a bond you are assured (providing the issuer doesn’t default) that it will be repaid at a certain date and you know how much will be repaid on buying the debt, hence the name “fixed income”.

There are many different ways to buy bonds. For example, you could buy them directly on the market via your stockbroker. In that case, you will get the annual coupon and your capital back at the end of the maturity, or before, if you choose to liquidate your position.

You can buy and sell ETFs as easily as any share that is traded on the stock market. This is an excellent option if you don’t know which bond to buy, want diversification and to keep your costs low.

By investing in the fixed income market, you can calculate your return with a large degree of certainty. However, you also have to carry the risk that inflation outpaces the income return e.g. let’s say that your return from a bond is 3%, but inflation is 5%. Now, you have effectively lost 2% of purchasing power with this “investment”.

Particularly, in today’s environment with governments printing money, this risk is quite prevalent. However, government and corporate bonds also offer some tailored solutions i.e. inflation linked bonds. Instead of getting a fixed coupon, you get an annual payment that matches the inflation rate.

Or you might like the returns offered by high yielding debt, but are concerned by the risk of default. You can mitigate this risk to some degree, by buying a fund of high yielding bonds.

The world of fixed income is quite elaborate and makes for a diverse “shop” of investing opportunities.

What questions should you ask when investing in bonds?

a. When do you want your money back?

If you’re going to buy a bond, you are buying a government’s or a company’s debt, with the expectation of getting paid back at a later time with a level of interest.

So of course you should first check what the interest rate is and when the bond reaches its maturity.

b. What amount of risk do you want?

The amount of risk that a bond represents is implicitly represented in its yield, which is influenced primarily by the market place (where buyers abd sellers interact) and to a lesser degree by ratings from agencies like Standard and Poor’s, Moody’s and Fitch.

You might have heard about rating agencies in the news recently – remember that ominous “triple A” and Irish bonds being downgraded to “junk status”? Rating agencies basically give their opinion about the chance that a bond has to be repaid. If they are afraid that a country or a company might default on its bonds, they will downgrade their “rating” on those securities.

Low risk might be represented by government bonds. For example, considering the health of the German economy and the way Germany manages its finances, German bonds would be considered low risk. Governments sometimes default on their bonds, but this is a rare enough event that it would make headlines, and the news and market are likely to sense it long before it happens. This is exactly what is happening with Greece at the moment, and the media have been talking about it for several months now…

High risk would be represented by corporate bonds issued by a company whose debt repayments might be in doubt – for example if the company is “highly leveraged”, meaning it has a high ratio of debt compared to its total capital.

c. Do you want to generate an income along the way, or simply incur capital gain?

Some bonds come with coupons: coupons are periodic interest payments that are handed out (yearly, or every six months) throughout the life of a particular bond, until the bond is repaid at maturity.

Other bonds don’t have coupons: you just get a higher amount of capital back at maturity than you paid at the beginning.

So, which one would you prefer? Income throughout the period during which you hold that bond (and capital when the bond is repaid), or a higher capital gain in one lump sum, when the bond reaches maturity?

One thing to consider here is that coupon payments represent income, whereas repayment of a bond represents a capital gain.

d. What level of liquidity are you seeking?

Liquidity means how easy it is to sell the bond to another person or entity.

If I’m not a bondholder, how does the bond market affect me?

People are generally under the impression that bondholders are extremely wealthy people – after all, who could afford to take a chunk of a country’s debt? The debt of a country usually amounts to several billion euros.

This impression is reinforced by reports of ministers for finance taking extraordinary action in order to keep the bondholders happy – this is why it was such a blow when Irish bonds were downgraded to junk status.

The truth is, bondholders can be anybody. There is a high probability that you, in fact, are a bondholder.

Are you thinking “I’m not! I never bought a bond in my life and to be honest a few minutes ago I didn’t know the first thing about bonds!“?

Well, insurance funds, pensions funds and companies, as well as individuals, can be bondholders. Even if you haven’t bought individual bonds, you might still be a bondholder, through your insurance or pension fund or company pension scheme.

Many funds and companies are very conservative when it comes to managing your money – they would invest in low-risk bonds like government bonds.

And in fact, buying government bonds is a very conservative action. Imagine: the year is 2003, the Irish economy is fantastic. Of course an Irish ten-year bond with 4% bond yield and a triple-A rating looks like a sterling investment. The ten-year bond will reach maturity in 2013.

Now who could have foreseen in 2003 that by 2012, one year before the maturity of that bond, the Irish economy would have undergone a drastic change? In 2003, buying Irish ten-year bonds was a very sensible thing to do.

When the yield of a government bond rises too high, this is a sign that something is amiss: investors are afraid that there will be a default situation and demand a higher interest rate. To buy time to restore confidence and gain access to money without exorbitant rates, that country will have to seek external finance, just like what happened to Ireland with the bailout. The ECB and IMF came in and dictated the fiscal policy Ireland would have to stick to in order to make sure to repay that money.

Now the country borrowed money in the first place because it was taking in less in tax: as you now know, less tax income might be a reflection of more unemployed people or companies doing less well and paying less corporate tax. Also, raising taxes is a politically difficult decision to take and political leaders might shy away from it.

Still, a government needs money for its day-to-day operations and so often turns to borrowing. But when push comes to shove and the ECB and IMF have to intervene, the country will have to raise taxes again, in order to make more money without having to borrow it – and in order to make good on its commitment to repay bondholders.

In Ireland, the Universal Social Charge is such a tax that was introduced as a direct result of Ireland’s mounting debt. Taxes have a very direct relation to bond yields, due to deficit. If a country has a deficit, it will try to get more money in, either through higher taxes, cutting spending or through borrowing.