By Jonathan YatesMay 4, 2021May 9th, 2022featured articles
No Comments

Summary View
Warren Buffett, CEO of Berkshire Hathaway, has been buying back Berkshire shares recently and the question is: why now?

We view this development at Berkshire to be very significant for two reasons:

The Master Asset Allocator
The last time Buffett bought back a meaningful amount of Berkshire Hathaway shares was in the mid-1970s. That was a time when Berkshire was categorized as a conglomerate, and conglomerates traded at significant discounted valuations then largely reflecting the many failed conglomerate business models of the 1960s.

As a result, and also reflecting the deep bear market during 1973/74, Berkshire’s shares often traded at a discount to book value and even steeper discounts to intrinsic value through the 1970s. 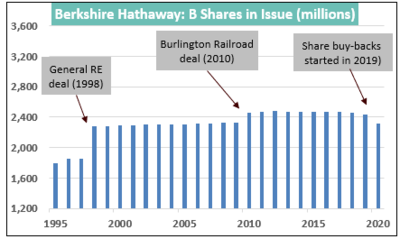 In the late 1990s, Buffett had a different issue to contend with. It was clear to him that global equity markets were very overvalued and his own holdings in the likes of Coca-Cola were similarly overvalued. In addition, Berkshire Hathaway’s own shares were trading at three times book value.

In contrast, government bonds offered unusually high yields to maturity at that time relative to inflation. So, in 1998, Buffett used Berkshire’s own overvalued shares to acquire General Re.

Buffett paid $22 billion for General Re, a premium (goodwill) of $15 billion over General Re’s book value or balance sheet value, using Berkshire’s own overpriced shares. General Re also came with an insurance float of $15 billion mostly invested in fixed income securities (US Government bonds) offering a yield to maturity of 5-6% at that time. And as Buffett knew that Berkshire would never have to repay this insurance float, he effectively diversified away from expensive equities while also securing high income from a free asset (General Re’s insurance float). 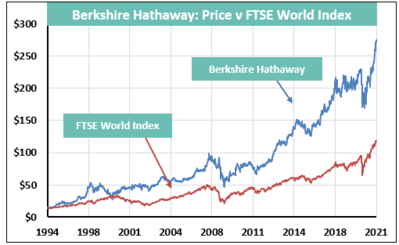 The alternative option was to have sold Berkshire’s overvalued equity holdings for cash and reinvest in government bonds. However, that option would have crystallised a capital gains tax bill. Smart deal, great asset allocations skills.

Today, Buffett’s move to buy back Berkshire’s own shares probably reflects a number of issues (i) that US equities offer poor value (ii) that an abundance of private equity capital is pricing him out of buying whole companies and (iii) with interest rates so low fixed income securities and cash offer little to no returns.

Several US Equity Valuation Metrics and Sentiment Indicators at Extremes
So, let’s examine some valuation metrics and sentiment indicators to see if they are at historical extremes: 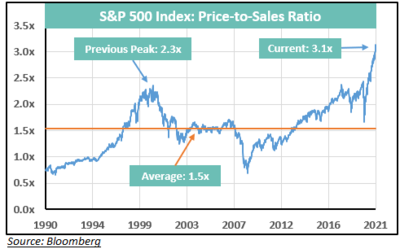 The chart on the right highlights the price-to-sales ratio for the S&P 500 Index, a proxy for the US equity market, since 1990.

Since the low in 2009, it has been all one direction as the US recovered quickest from the Global Financial Crisis, moving quickly to recapitalise the banking system, lowering the corporate tax rate and benefitting from leadership positions in technology.

The valuation of the S&P 500 Index has been constantly ticking higher and has accelerated higher in the past year with the price-to-sales ratio for the index now at an all-time high of 3.1, and 35% above the previous 1999 peak.

US Market Value to US GDP – the Buffett Indicator 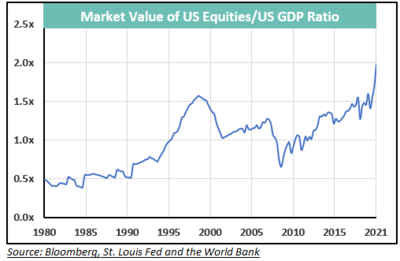 Often referred to as the Buffett Indicator, the second chart provides the ratio of total US stock market valuation to US GDP (economic output) since 1980.

The chart indicates that the valuation of US equities compared to US economic output has been rising (intermittently) for 40 years i.e. relative to economic output the US stock market has been getting more and more expensive.

Of course, a lower US corporate tax rate today (from circa 45% in 1970 to 21% today) and a higher proportion of international revenues generated by US companies compared to 1980 account for a proportion of the higher US equity market valuation.

A significant part of today’s higher valuations reflects the lower interest rate backdrop (and lower bond yields). In late 1999, there was an incentive to sell equities and buy the safer US 10-year Government bond which offered an attractive yield-to-maturity of 6.2%. Today, the same 10-year US Government bond offers a yield to maturity of just 1.58%, so that it is not as clear cut. It’s possible the high valuations will remain, but they are hugely dependent on interest rates staying extremely low. 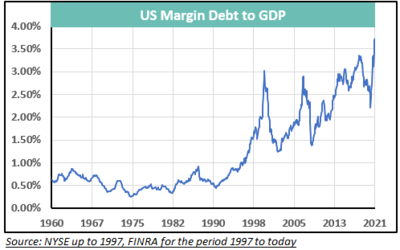 Margin debt is a form of leverage for investors and is the amount of money borrowed from a broker using a margin account. And, of course, while leverage can enhance gains, it also amplifies losses.

The chart on the right highlights the ratio of margin debt to GDP in the US since 1960. Currently, the ratio is 3.7% which has increased by over 50% since April 2020 and is well above the levels reached during the dot-com bubble in the late 1990s and leading up to the Global Financial Crisis in 2008.

Borrowing against your portfolio signals confidence but it seems that confidence rides high after strong stock market rallies and not before. It’s a contrarian indicator and a ‘Sell’ signal. 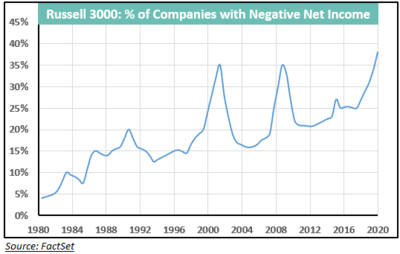 The Russell 3000 Index is also a good proxy for the US stock market and represents circa 98% of companies listed on US equity markets.

At the end of December 2020, the percentage of companies in the index with negative earnings stood at an astonishing 37% – recently breaking above the levels of the late 1990s/early 2000s and 2008.

Irrational Exuberance – SPACs, Cryptocurrencies, Retail Investors
Signs of rampant speculation are also appearing in many corners of the market, in the US in particular, which is fuelled by easy credit conditions.

Despite the global pandemic which started in March 2020, last year was a record year for initial public offerings (IPOs) in the US. A second-half surge in IPO activity was fuelled by a boom in offerings from Special Purpose Acquisition Companies (SPACs), blank check companies which have no specific business model and are raising billions for potential acquisitions of private businesses in the future. And this trend has continued into 2021 with IPO proceeds amounting to $230 billion year-to-date, dwarfing the $80 billion raised in the first quarter of 1999 during the dot-com bubble.

The price of Bitcoins has surged by over 700% since March 2020 and it, along with other cryptocurrencies, has all the signs of a speculative bubble. Bitcoin enthusiasts argue that its limited supply provides protection against central banks printing money. However, when paper currencies return to paying an interest rate above the inflation rate, Bitcoin may well have no floor price given it has no intrinsic value (provides no income and has no alternative use).

Flurries of retail activity have also picked up over the last year with many people stuck at home due to lockdowns and government support in the form of stimulus cheques – with the volume of small retail purchases (less than 10 contracts) of call options on U.S. equities increasing 8-fold in 2020 compared to 2019, and such speculative activity in 2019 was already well above long-run average. 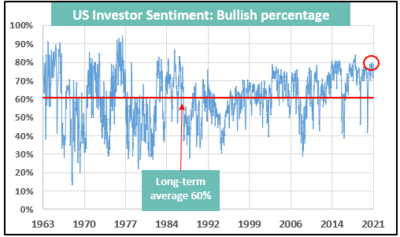 The chart opposite is the Investors Intelligence Survey, which is a weekly survey that gauge’s investor sentiment in the US dating back to the 1960s.

With sentiment having fallen off a cliff in March 2020 during the initial market sell-off on the Covid-19 lockdown news, sentiment in the US is now back at a level that suggests caution (79% bullish), at least on a short-term basis.

Looking at the weekly US Investors Intelligence Sentiment Survey, it currently highlights a high level of bullishness. Some 79% of respondents expect markets to be higher in the near-term compared to a long-term average of 60%. The indicator, of course, is a contrarian signal with excessive bullishness more likely than not to signal a short-term peak.