The board of Berkshire Hathaway is clearly of the same view and has recently obtained the authority from shareholders to buy-back shares at between 0-10% premium to net asset value. At $73 a share (B shares), the stock is currently trading on a 12% premium to the 2010 net asset value (NAV) or 5-6% to the estimated 2011 NAV. 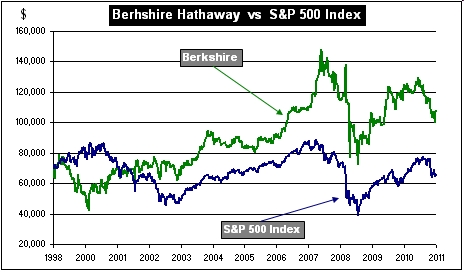 It has been a long time since Berkshire Hathaway shares have traded anywhere near their net asset value i.e. the balance sheet worth. And a quick perusal of

Berkshire’s 2010 Annual Report provides some figures and facts to back up what appears to be a fairly compelling long-term value investment opportunity.

Although the US stock market peaked in late 1999, Berkshire’s share price (first chart) has shown progress over that same timeline. The out-performance is a pale shadow of what the company achieved from 1965 to 2000 but it has continued to outperform, nonetheless. 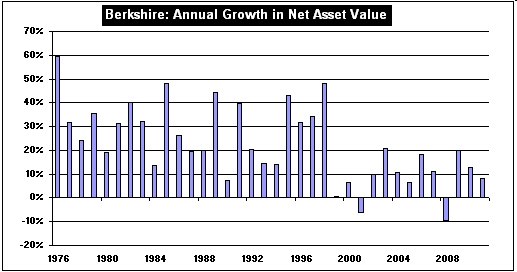 The second chart highlights the growth in Berkshire’s net asset value (NAV) from 1976 to 2011 inclusive. Recent growth rates have slowed but have still been between 10-20% annually with the exceptions of down years in 2001 and 2008.

An examination of the group’s 2010 Annual Report highlights a number of relevant points; 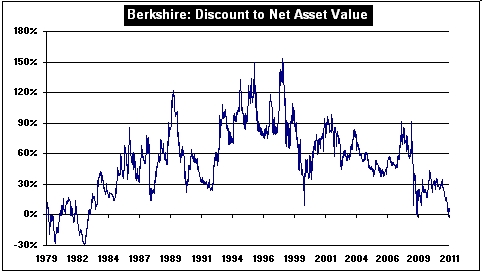 After Tax Earnings Understated
In Buffet’s letter to shareholders, he highlights that the after tax earnings power of the business is circa $12 billion. To that we can make a couple of additions;

Combined, this could add a further €3.7 billion to Berkshire’s earnings power and suggests that Berkshire’s assets, as they stand, can deliver after tax earnings of $15.7 billion. That would represent a 10% after tax return on 2010 net assets of $157.3 billion. Given the quality and likely growth attached to that earnings stream, one could argue that you have a bond-like asset with an initial earnings yield of 10%, which should continue to grow. To an investor who pays a 12% premium over the 2010 net asset value, then the starting earnings yield is still an attractive 8.9%. The attractions of an earnings yield with both defensive and growth characteristics appear fairly obvious. In comparison to a 2% yield from US 10-year government bonds, which offer no growth, the opportunity or value on offer is even more striking.

Dealing with the Elephant in the Room
Of course, some of the de-rating of the shares reflects underlying concerns about what happens when Buffett moves on to the other world. He has threatened to direct the company from the grave which he says brings new meaning to the phrase ‘thinking outside the box’. I believe two sensible observations can be made when Buffett is no longer around;

For these reasons, I would not fear Berkshire Hathaway post Buffett. For sure, the stellar track record of the past is most unlikely to be repeated. But at the current share price, investors appear to be pricing in no growth – and that looks way too bearish.

The B Shares (BRK-B) Trade at a Lower Price
Investors can buy the B shares which trade at 1/1500th of the price of the A shares (or $73 a share). This should suit investors with more modest means than institutional investors. Owners of the ‘B’ shares can also attend the annual general meeting in Omaha, Nebraska which takes place every May.