Did global equity markets bottom on Monday, 23rd March? If we listen to the history of capitulation events, it is possible that they did, but it is also too early to make a definitive call on it. This Featured Article should be read in conjunction with our earlier Featured Article explaining the History of Capitulation in markets.

The coronavirus has brought on a liquidity crisis for many businesses and individuals, but so long as additional credit is made available to tide over those who need it for a few months this should not turn into a solvency crisis.

In that regard, this crisis is quite different to 2008. Back then, the credit had been extended from 2003-07 against property values that were unrealistic, so that that crisis was one of solvency. The money, and huge quantities of it relative to GDP, had already been lost by the time the crisis hit, even if many of us didn’t realise it at the time.

In contrast, this time around it couldn’t be any clearer what needs to be done, and early initiatives from authorities look very encouraging, not just in Ireland but in the UK, Europe and in the key US economy as well as elsewhere.

At GillenMarkets we have argued these past few weeks that what we are witnessing in global equity markets is a capitulation event; that time in markets where everyone is selling together, so that the speed of decline accelerates until buyers are found.

Given the liquidity in markets, buyers are found relatively quickly at some price. This time around, it took a mighty 34% decline from peak to trough on the S&P 500 Index to find the (possible) bottom on Monday, 23rd March just gone.

Capitulation events are scary, they are relatively rare, but there are historical precedents to help guide us:

Many people quite rightly highlight that the coronavirus will most likely return in the autumn, so that the damage to markets cannot be over. Everyone can understand that line of thinking.

But if it’s a widespread view, it’s also highly likely that it was part of the reason for the panic selling and quite possibly already priced in by Monday, 23rd March last.

In reacting to these events and the current sell-off it’s a timely reminder that volatility in markets is not the thing investors need to avoid, and it’s not risk. Selling because the volatility is painful crystallises permanent losses when often none need be taken.

Real risks include owning poor businesses, owning financially stretched businesses or overpaying for assets. For many, investing through diversified fund structures covers these risks, although passively managed tracker funds, such as exchange-traded funds, do not necessarily cover valuation risks. 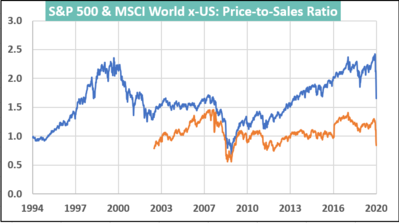 As the chart opposite highlights we started 2020 with US equity markets offering poor value. The Price-to-Sales Ratio is a useful value indicator as it overcomes the shortcomings of earnings, which some argue are inflated by share buy-backs. And the chart highlights that at the start of 2020 the key US equity market was richly valued at almost 2.4 times revenues (sales), a level of valuation last seen in 1999, at the peak of the late 1990s equity bull market.

In contrast, the MSCI World x-US Index is trading at 0.84 times sales, almost half the valuation of US equities. Granted, the US has technology leadership, but tech stocks are represented in the MSCI World x-US Index. The UK and European equity markets, for example, trade substantially below where they were in 1999, yet earnings and dividends today are a multiple of what they were back then.

Obtaining good returns over the medium to long-term requires you to buy good value and to minimise the risks. In that regard, investment is the art of the specific and not the general.

At the time of writing, Berkshire Hathaway, managed by its iconic Chairman, Warren Buffett, is trading at close to balance sheet value, something that has occurred on only three previous occasions since 1995.

Coca-Cola, a huge and highly defensive business, offers a dividend yield of over 4% at a time when interest rates are zero and our own CRH trades below the value of the capital employed on its balance sheet. These are not outliers.

I’ll finish off with a quote from Brian Marber, author of Marber on Markets (2007) – ‘It is neither necessary nor possible to understand markets; but it is essential you come to terms with them’