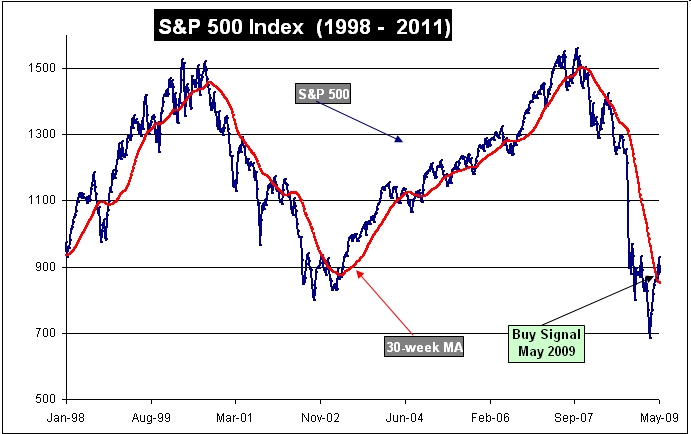 The chart opposite highlights the Coppock Indicator on the Japanese market at end of April 2009. It may be barely distinguisable from the graph but the indicator turned less negative while below zero (the buy condition) on 30th April 2009 and hence a buy signal has been given. 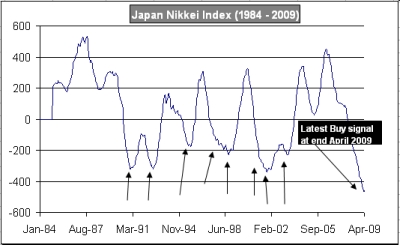 Although the economic news remains grim, the positive turns in the above indicators suggest that the odds are high that the markets have seen the bottom and can make further progress from here. The positive signals being given by these indicators fly in the face of what investors are reading in the printed media or hearing from many market commentators. 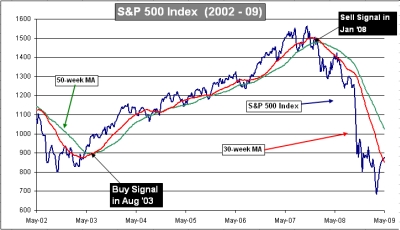 The 30 & 50-week moving average indicator has not yet turned positive. Again, members can see this from the chart below and from the full range of charts available in the member’s section of the web site. A copy of this indicator on the US market is below. This is a slower, more conservative, indicator and it will go positive in the next few months if markets continue to recover or range trade around current levels. As the chart highlights, unlike the 30-week moving average and coppock indicators, there was no ‘Buy’ signal from this indicator at the start of May 2009.

Overall, however, the evidence from the charts is now overwhelmingly suggesting that the markets have turned.