Not All Equities Are Equal 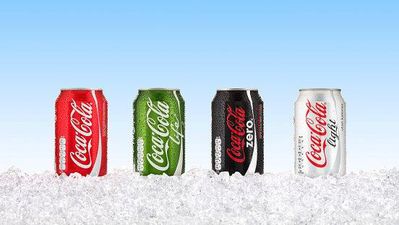 To say that savers and investors are in a strange world these days is an understatement.

With traditional risk-free assets like bank deposits and long-dated government bonds offering virtually no income, there’s no return for those who do not wish to take any risk.

Then, again, as it’s in governments and central banks interest to have inflation – as this lowers the government debt load over time – inflation is a silent, persistent risk for everyone that even those saving through risk-free assets can’t avoid. In short, if you don’t invest at least a portion of your savings in assets that have proven to at least keep pace with inflation, it is likely to eat away at the purchasing power of your savings over time.

Even though stock markets (equities) have been the best place to save and invest over the long-term, many investors fear markets. Recessions knock corporate earnings and share prices fall in anticipation of recessions. And, in a severe recession, like occurred in 2008/09, individual companies can, and do, go bust.

Learning how to mitigate those risks is an important part of investing. And not all risk assets are equal. A theme we have followed on the website for subscribers for several years now is the US & European defensive global consumer franchise stocks theme. In this Featured Article we take a look at the performance of a basket of such stocks and how they performed during the past three recessions and bear markets (1990-1992, 1999-2003, 2007-2009). We argue that, in terms of risk, a basket of such stocks offers a middle ground between non-risk assets and risk assets.

The companies we are talking about are low risk to the extent that collectively they tend to have much less correlation to the underlying economy than most companies. But, they grow their earnings and dividends over time and, so, offer equity-like returns, but without the economic-risks associated with general equities and property.

To make the point, we will now show the performance of a basket of eight US defensive global consumer franchise stocks through the last three recessions and bear markets in shares. The stocks in the basket include Coca-Cola, Johnson & Johnson, McDonalds, Wal-mart, Proctor & Gamble, Colgate, Kellogg and Kraft (now Mondelez). This list is not exclusive and there are many other defensive-like growers that might have been included. 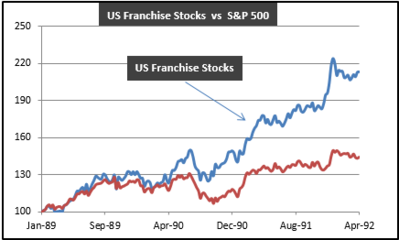 The first chart highlights the point best of all. With the onset of the initial Gulf war and recession in the 1990 to 1992 period the US S&P 500 Index dropped 20% in mid-1990 before recovering over the following year.

In contrast, the US defensive global consumer franchise stocks suffered only a minor set-back before returning to their growth path with their earnings and dividends unaffected by the related economic downturn. Investors were enamored with the combination of resilient earnings growth over the period, driven by emerging markets exposure, along with their defensive characteristics.

Now let us roll forward to the 1999-2003 period. The case for the US defensive global consumer franchise stocks was not so clear entering the stock market and economic downturns of the early 2000s. Global developed stock markets peaked in late 1999 following an almost uninterrupted bull market that started in 1981. 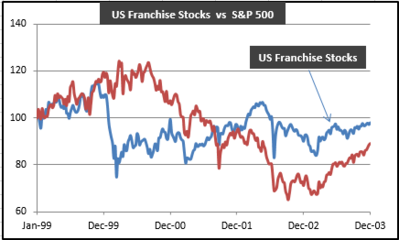 Even the slower growing defensive consumer franchise stocks were wildly overvalued by investors in the late 1990s. At that time, investors were paying 35 times Johnson & Johnson’s earnings, 50 times Coca-Cola’s earnings, 45 times Wal-mart’s earnings, 38 times Colgate’s earnings and so on. These valuations were significantly above the long-term norms and offered little value when you realise that the risk-free US 10-year government bond was yielding over 6% at that same time.

The basket of eight US defensive global consumer franchise stocks suffered what we might describe as a swift valuation-driven correction in early 2000, but from there they were range-bound and fared better than the average stock. In fact, by December 2003 this basket of defensive growers was back to where it started in January 2000, despite having been grossly overvalued at the outset. No investor suffered a permanent loss of capital despite the initial overvaluation of these stocks. 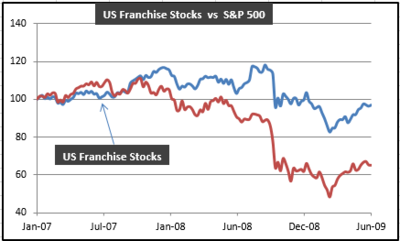 In the 2007-09 Global Financial Crisis, once again this basket of stock collectively fared better than the market. In fact, by end June 2009, just three months after this particularly brutal bear market ended, this basket of US defensive global consumer franchise stocks was more or less back to prices just before the crisis started, and proved to be far more defensive than general equities.

So, while the risks in the real economy of over-leverage hugely damaged large parts of the stock markets (banks, property companies, economically dependent sectors in general), the lower (economic) risks in the defensive global consumer franchise stocks stood them, and investors, in good stead once again.

Understanding Their Defensive Characteristics
These types of companies have unique characteristics that give them staying power, resilience in recession and the capability of delivering income and growth with a higher degree of reliability than is available from general equities. These characteristics include:

Combined, these characteristics have delivered; 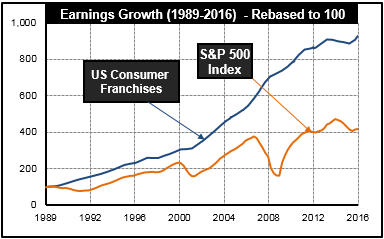 The last chart shows the combined earnings trend from the aforementioned eight US global consumer franchise stocks covering a 28-year period from 1989 to 2016. There was hardly a single year where, collectively, earnings at these eight stocks declined, and over the entire period they grew earnings at a faster pace than general equities (as represented by the S&P 500 Index). In contrast, the S&P 500 suffered a number of significant earnings declines over the same 1988-2016 period.

Going forward, we do not expect these defensive growers to grow their earnings at a faster pace than the market as they are much bigger companies today than back in the late 1980s. But steady, low single-digit growth seems achievable, and on a medium-term basis investors should achieve similar growth with minimal risk.

Keeping the Theme Refreshed
Since 2010, we have promoted this theme as a low-risk way to invest in markets, and we provide an update on the theme a couple of times a year.

In 2012, we started to broaden the theme to include the UK and European equivalents like Kerry, Heineken, Henkel, Unilever, Diageo, Nestle and Reckitt Benckiser. More recently, we have been bringing in smaller equivalents like PZ Cussons (owner of the Imperial Leather and Care brands) and AG Barr (owner of the iconic Scottish soft drink brand, IRN-BRU). Smaller defensive consumer franchise stocks have a better chance to grow their earnings at a faster pace than their larger equivalents over the medium-term from here.

The GillenMarkets website acts as a tool set for do-it-yourself investors, but we often take the opportunity to point out that if self-investing is not for you or if you are time poor or just lack the confidence in weaker market conditions then we also offer customised asset management services – just call on 012871400 or email us to private@gillenmarkets.com and we will contact you.