In The Markets Glamour Rarely Pays 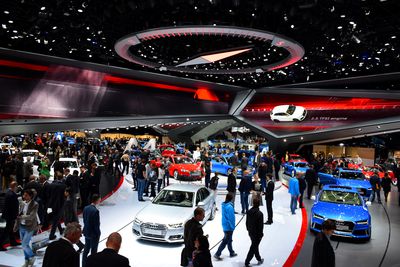 As technological advances continue to open new possibilities for humanity, it also leads to floods of exciting new business ventures which were never before possible. Invention, sophistication or adaptation of existing products and services is not just serving to transform industries – but is spawning entirely new ones.

The examples are plentiful: renewable energy is finally becoming a significant source of power, drone technology is moving beyond military operations to maintenance, transport and retail applications, while 3D printing is being touted as the next industrial revolution. Even within my own profession, ‘fintech’ is challenging the traditional methods of delivering financial services.

For investors interested in gaining exposure, there are no shortage of publicly traded companies to invest in. Buying their shares, however, involves a considerable leap of faith. To commit capital to an obscure company in its formative years, one must be willing to invest based on projections of cash flows, rather than on proven track records of wealth creation – effectively, you are buying into the business plan instead of the business.

Take Tesla, for example, the electric car manufacturer founded by Elon Musk. As difficult as it is becoming to deny the legitimacy of the electric vehicle revolution – of which Tesla is a pioneering force – the level of enthusiasm that investors have for the stock appears reminiscent of the “irrational exuberance” that then Federal Reserve Chairperson Alan Greenspan lamented during the dot com bubble of the 1990s.

Tesla’s growth plans have captivated audiences to such a degree that it is now the largest automaker in the US in terms of market capitalisation, having surpassed General Motors’ to the no.1 spot earlier this month. This despite General Motors selling 10 million vehicles in 2016 for a net profit of $9.4 billion, compared to the 76,000 vehicles sold by Tesla for an operating loss of $773 million!

Clearly, shareholders are betting on the growth potential of the company rather than its performance to date, but the $50 billion stock market valuation placed on Tesla looks stretched nonetheless. It makes sense that one should expect to pay a premium for companies with massive growth potential, but paying prices which are completely disconnected from underlying fundamentals is the antithesis of the type of investment approach we would prefer to endorse.

Instead, consider Unilever – the Anglo/Dutch conglomerate which has operated within the altogether less inspiring space of Consumer Goods for more than eighty years. It’s responsible for billion-euro brands such as Dove, Lipton, Hellmans and Lynx. 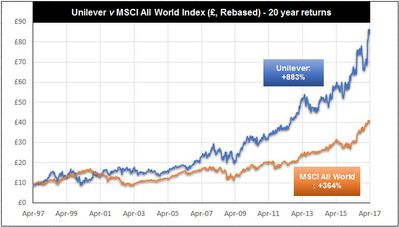 Unilever has had a good recent run, with the shares returning 47% over the last two years (including dividends). It has also chalked up a very satisfactory long-term performance, appreciating by an average of 12.1% compound per annum over the past twenty years. Evidently, as the chart below shows, the company’s recent performance is not out of character.

Unilever’s product portfolio consists of everyday essential items which gives an element of defensiveness to its earnings stream. Its brands are well-recognised and established, giving it a degree of pricing power while its blueprint for growth centres around quickly growing middle income populations in emerging markets, where the company earned 57% of its revenues last year. Furthermore, its balance sheet is strong and the shares are quite reasonably priced with a price-to-earnings ratio of 21.7.

Under the basic tenets of business risk, financial risk and valuation risk, therefore, Unilever ticks all the boxes and its track record shows that we don’t have to invest like venture capitalists to enjoy the considerable fruits which the stock markets can offer. Constructing a portfolio of well-known blue-chips may not be as stimulating as rooting out the next ‘big thing’, but as George Soros said with regards to investing: “if you’re having fun, you’re probably not making any money”.