Is The Gold Bull Market Resuming?

The gold price is once again pressing up against the ceiling of $1,350 that has held it in check for several years now. This new featured article is aimed at addressing the question: is the gold price in a new uptrend?

The most recent gold bull market that started in 2001 ended in September 2011. Over the subsequent four-year period to end 2015 gold endured a 45% sell-off from peak to trough as inflation remained subdued, the dollar strengthened and equities regained their poise, and bottomed at around $1,045 an ounce in late 2015.

A Series of Higher Lows Indicates Demand Dominance in the Gold Market
Since that bottom, the price has traded in a relatively narrow range but what is fairly clear from the first chart below is that, while $1,350 an ounce has acted as a ceiling, the gold price has made a series of higher lows over the subsequent 3 1/2 years indicating that demand for gold has been edging ahead of supply over this period i.e. on each retreat from the $1,350 area the low is higher than the previous low (referred to as a series of higher lows and this trend is clearly visible in the chart).

In other words, the gold price has been in an uptrend since the bottom in late 2015, albeit a modest uptrend. A break above the $1,350 area would open up the likelihood of a re-test of the 2011 highs at the $1,900 an ounce level. To determine the likelihood of this happening, we examine previous gold bull markets and some key factors that underpinned them to judge the probability of a break upwards in the gold price. 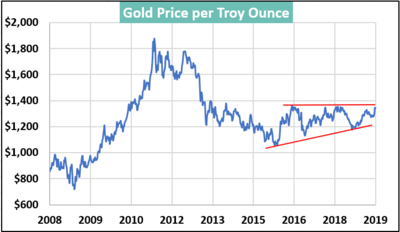 The Gold Price Relative to Inflation
So, the triple drivers of the gold price were fully aligned in the early 1970s. However, by the early 1980s the rally had taken the gold price substantially ahead of the level that could be justified by recorded inflation, and the gold bull market had exhausted itself.

The second chart highlights both the actual gold price (in black) and the price that gold would have been had it simply tracked consumer price inflation in the US (dotted green line).

By the early 2000s, after a 20-year gold bear market, the gold price was once again significantly undervalued relative to recorded inflation. Monetary policy was being loosened during the 2000-02 economic downturn and the dollar started to weaken. However, inflation remained fairly tame. But an undervalued gold price (versus inflation), a weakening dollar and overvalued equity markets were enough to send the gold price into a new multi-year bull market. 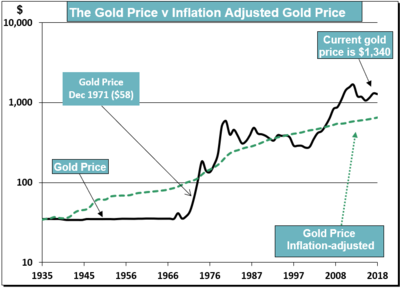 Gold Price Well Ahead of Production Cost
Today, as the second chart highlights, there is no evidence of gold being undervalued against recorded US inflation. In addition, according to the World Gold Council the all-in cost of producing gold by the major gold miners is circa $875 an ounce on average. The current market price of gold is $1,340 an ounce, so that miners are obtaining a gross margin of around $465 an ounce on average, or a gross margin of 53%. So, as gold miners are profitable at current gold price levels they have plenty of incentive to supply new gold assuming sufficient reserves and discoveries.

In order to ignite a new gold bull market, then, it will probably require a weaker dollar and an uptick in inflation or inflationary expectations. Is either likely?

The Conditions for a Weaker Dollar Look to be in Place
A weaker dollar is entirely possible. The markets have been signalling for some time that the US central bank’s attempts to raise interest rates and reverse quantitative easing will not work. Quite simply, demand for credit remains weak, not helped by the fact that new economy companies tend to be capital light. In addition, there’s probably too much debt and not enough growth. All in all, a return to normal monetary policy conditions does not look to be on the cards, even eleven years after the Global Financial Crisis.

Last week, the US 10-year bond yield dropped to 2.08% compared to a recent peak of 3.29% at the back end of 2018. A drop of such magnitude in long-term US interest rates is signalling subdued economic growth conditions, possible anxiety over global trade tensions, too much debt and weak demand for credit.

An interesting question, then, is; can the US Federal Reserve ever get rid of the debt it created on its balance sheet? If not, it has been money printing, something supporters of quantitative easing have argued against all along.

Of course, $4 trillion of debt created by the US central bank through its quantitative easing programmes was useful at the time in that it lifted asset prices, which alleviated financial stress in the housing market and banking sector. Recovering house prices allowed those with too much debt to sell at prices that cleared their debt. In the view of this writer, it was a necessary and useful macro-economic lever at the time. The problem is trying to reverse out of it.

In the US, long-term interest rates are below short-term interest rates (referred to as an inverted yield curve). In the past this indicator signalled a high probability of an impending economic recession. It’s possible that quantitative easing has reduced the usefulness of this previously reliable leading indicator, but it would be foolish to ignore it. 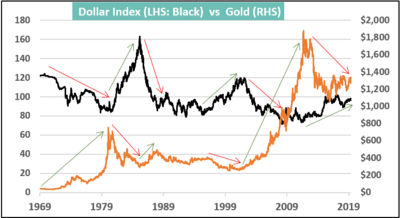 In the context of US government debt of $21 trillion an extra $4 trillion of debt on the Federal Reserve’s balance sheet is hardly a major deal, and even if it is, in effect, additional permanent debt, it is probably not enough to substantially weaken the dollar and re-ignite the gold bull market.

However, a US budget deficit running at over $1 trillion annually is likely to rise a good deal further if recessionary conditions appear. Recession may even result in the Federal Reserve introducing a fresh round of quantitative easing. Should this scenario occur, and the odds of it occurring are rising, US debt levels would start to rise rapidly. Already at 100% of GDP the implications of this would surely start to weigh on the dollar.

So, we don’t appear to have an undervalued gold price relative to recorded inflation, the dollar has yet to display any real signs of weakness and there’s been no real uptick in inflation, not yet anyhow.

And the chart opposite is positive for the gold price in this regard. US real interest rates (i.e. the US 10-year bond yield less the inflation rate) are currently extremely low, and typically low to negative real US interest rates have corresponded closely with gold bull markets.

Another factor that has been helpful has been consistent buying of gold by the central banks, which have been strong buyers of gold each year since 2010. In 2018, the world’s central banks accounted for 15% of global gold demand.

Gold is rare, divisible, easily transportable and does not corrode with time, so that it is easy to understand why it has been the only currency that has consistently acted as a store of value over the millennia. But the major drivers of a gold bull market would not appear to be in place; not yet anyhow. Gold is not undervalued relative to US inflationary trends, the dollar remains firm and US inflationary trends remain tame.

In our view, the odds are against a resumption of the gold bull market at this point in time and the ceiling at $1,350 since mid-2016 looks more likely to hold than not. That said, a decisive break above the $1,350 level would confirm that demand for gold has regained the upper hand over supply and could signal rising investor concerns over future US debt levels and the consequences for the dollar and inflationary trends. So, we watch and wait.

Gaining Exposure
There are several gold ETCs (exchange-traded commodities) listed on the London and European stock exchanges. Gold miners, of course, are leveraged to the gold price because they have fixed costs and there are gold miner ETFs (exchange-traded funds) on the London Stock Exchange. Our preference is the gold miner royalty/streaming companies that act as equity-like financiers to the precious metals miners. Suitable specific investments for exposure to precious metals universe are provided in the members’ area of the GillenMarkets website.

Joining the Database, Subscribing to our Newsletter or Availing of our Asset Management Services
If you are not on our database you can join it by clicking the link. There, you will also find details of our 14-Day Free Trial and Full Membership offerings. We also provide Advisory Asset Management Services for personal, corporate and pension monies.