Having Your Cake & Eating It: Defensive Global Consumer Franchise Stocks

Having your cake and eating it too!
Sometimes you can have your cake and eat it! In investing that means buying stocks with good defensive growth characteristics. In May 2010, GillenMarkets introduced the US Global Defensive Consumer Franchise Theme for subscribers and the theme included eight US companies at that time Coca Cola, McDonalds, Proctor & Gamble, Colgate, Johnson & Johnson, Wal-Mart, Kellogg and Kraft. The European equivalents Unilever, Diageo, Reckitt Benckiser and Kerry were added to the theme in 2011. Kraft has since de-merged and we have substituted Mondelez (the spin off from Kraft) in Kraft’s place.

The aim of this theme has been to offer subscribers a lower-risk way of obtaining the returns on offer from markets over time by owning a portfolio of stocks that are global brands, financially strong, have a history of delivering growth and are defensive in recession. This note is an update on the progress of the theme, and the first chart tells the story well. 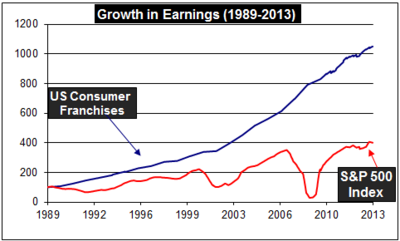 In contrast, earnings at the 500 companies making up the S&P 500 Index have grown at a lower 5.7% compound per annum rate over the same 1989 to 2013 timeline, and the progress of those earnings was erratic. Most companies are cyclical and their earnings decline in recessions. On three separate occasions, earnings for the S&P 500 declined in the 1991 recession, the 2001-03 recession, and the 2007-09 global credit crisis.

In other words, the eight stocks I chose for the Global Defensive Consumer Franchise Stock Theme in May 2010 all had special characteristics. They had a competitive advantage of one sort or another, global reach, and demand resilience. The list was not an exclusive one. There are other stocks with these characteristics, but a list of eight provided sufficient diversification.

The competitive advantages that these companies possess more than anything else is strong branding and global distribution. Through high quality manufacturing, persistent advertising and/or cost competitiveness, each of these eight companies has managed to bring to market a suite of products that the consuming public are convinced (rightly or wrongly) are the best products available. In some cases, consumers are prepared to pay premium prices for the respective company’s products, which provide these companies with higher margins and returns on capital employed. In other cases, such as Wal-Mart and McDonald’s, a superior offering may be driven by low prices, which results in growing market share. The positioning of each company in its relative market is so strong that words like ‘Coke’, ‘Kellogg’, and ‘McDonald’s’ have become synonymous with soft drinks, convenience food and fast food. This achievement has several advantages:

Global distribution is another weapon in most of their armouries. Many of these companies already have the infrastructure in place to take advantage of the growing middle classes incomes in the developing world particularly in China, India, Asia, Latin America and, more recently, Africa.

Growth in earnings for the US global consumer franchise stocks since the theme was introduced in May 2010 has been 6% compound per annum, against 13% for the S&P 500. Earnings for companies in the S&P 500 were still recovering from cyclically depressed levels in 2010, 2011 and 2012. But over the long-haul, it is the defensive US global consumer franchise stocks that have delivered the better growth and with more consistency, as the earlier chart highlights. 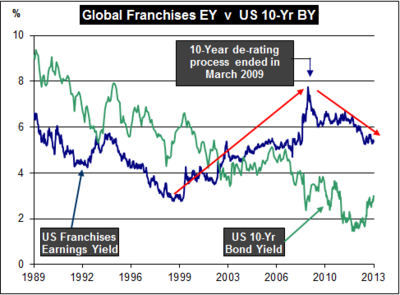 As their earnings are so consistent, the US global defensive consumer franchise stocks can more easily be compared to the (guaranteed) income available from government bonds.

The historic earnings yield available from these eight companies at the end of December 2013 was 5.3%. The yield available from the US 10-year government bond was 3.0%. Yet, the earnings yield can be expected to grow in the years ahead as these global defensive franchise stocks generate growth by introducing new products, expanding into new regions and, in some cases, buying back shares.

As the chart highlights, in late 1999 the earnings yield available from this portfolio of stocks was circa 3%. At that same time, the risk-free US 10-year bond was offering a yield of over 6%. In late 1999, the value was in the US bonds, and not in these stocks. Today, however, the value continues to reside in these stocks, and by a wide margin. In other words, relative to the value on offer in the main alternative asset class, US long-dated bonds, the US global defensive consumer franchise stocks still offer good value.

Not Overvalued Relative to History 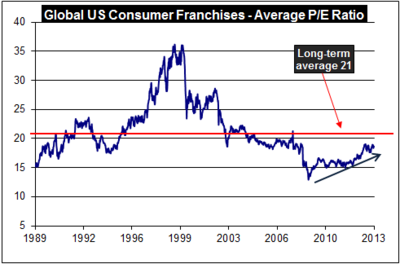 Currently, investors are paying 18.6 times historic earnings for these companies. This is still below the long-term average.

The next chart (taken from the Federal Reserve Economic Database) displays the after-tax corporate profits of US businesses and expresses them as a percentage of GDP.

Currently, US corporate profits are 11% of GDP, some 4.6% above the long-term trend of 6.4%. The chart indicates that, historically, any time profits have moved past 7-8% of GDP, they have reverted back to (and often below) the long-term average.

Today, US corporate profits are at their highest point in 66 years, suggesting that there remains a risk that corporate earnings in the US could, once again, revert to the mean, and downwards. This suggests that S&P earnings are similarly at risk of a mean reversion in margins. However, one cannot make the same argument that earnings at the US global defensive consumer franchises are at similar risk. 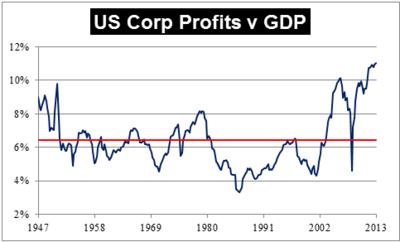 The question must then be asked: why would an investor own the S&P 500 (via an exchange-traded fund or otherwise), which is composed of businesses with a higher risk to current earning in the coming years yet which trade at over 19 times those earnings, when he could own a portfolio of global defensive consumer franchise stocks with better earnings resilience and which are on offer at a slightly lower 18.6 times earnings?

In all, I see little valuation risk in the US global defensive consumer franchise stocks either in terms of:

Since May 2010, the eight US global defensive consumer franchise stocks have gained circa 45% on average (excluding dividends). Over the same period, the S&P 500 Index has advanced 65%. Nonetheless, the theme remains a low-risk one and it is my view that these giant consumer stocks can continue to deliver annual returns of perhaps 7-8% from here including dividend income.