By Jonathan YatesFebruary 25, 2021May 9th, 2022featured articles
No Comments

Introduction
Markets are nothing if not adaptive. Over time, they change to reflect industry and they exist to provide capital for emerging industries.

A recent and intriguing example is the listing of a number of investment funds on the London Stock Exchange in the past few years to raise capital for the purchase of often iconic music catalogues, copyright interests and the underlying royalty income streams that such assets provide.

In turn, such listed funds (known as investment trusts), which can be bought through any stockbroker, online or otherwise, can provide investors with access to this growing niche area of investing, with their above average dividend yields along with likely decent growth in those yields over the medium-term.

This latest Featured Article from GillenMarkets is aimed at providing investors with an understanding of this developing investment theme and the likely risks and rewards of investing in it.

Music Integral to People’s Lives Since the Dawn of Time
The oldest musical composition to survive in its entirety is believed to be from the first or second century AD found engraved on an ancient tombstone in Turkey and is known as the ‘Seikilos Epitaph’. We have seen many eras of music over time including older eras such as prehistoric, the biblical period, Renaissance, and Classical Music.

More recently, whether it has been the rise of the Jazz Age in the 1920s, Rock & Roll in the late 1940s and 1950s or the popularity of Rap in the US in the 1970s, music is found everywhere in society and is considered universal – with people all over the world, including isolated tribal groups, having some form of music.

The way people consume music has also evolved over time. In 1948, Peter Goldmark led a team of developers at Columbia Records to create the first LP record, a phonograph record that would hold at least 20 minutes per side. Since then, we have seen the development of the cassette tape in 1962, followed by the release of the first music CD in 1982.

Today, the rise of streaming platforms such as Spotify and Apple Music has been a game-changer following an era which was plagued by piracy and illegal downloading. Not only are these legal platforms convenient and affordable for users, but artists and songwriters are also benefiting from rising royalty income which is generated from streaming and is protected by long-term copyright interests.

Whatever the medium of consumption, people’s love for music remains absolute. An ever-changing technology-led world means music can now be consumed without leaving the house – leading to more and more consumers streaming, sharing, and discovering music in all parts of the world with the touch of a button.

The Music Industry and the Attraction of Music Catalogues
The music royalty payments for copyright owners have historically been regarded as investable assets due to their attractive, consistent, and protected cash flows and the fact that those returns have tended to be uncorrelated to equity or fixed income markets i.e. music royalty income streams have historically had a low sensitivity to economic activity.

Intellectual property is what underpins the economics of the music industry. Copyright protection arises once a musical work has been created and the value of music flows from this copyright and is associated with original works, performance and dissemination and the royalties earned from these. The rights associated with copyright ownership are defined within national copyright laws.

The copyrights for songs persist for decades and protect the royalty income. For example, in the UK, copyrights last for 70 years after the death of the writer or the last surviving co-writer. For popular, everlasting songs this can produce an attractive and consistent level of income for many years. For instance, ‘Merry Christmas Everybody’ by Slade earns circa £500,000 every Christmas.

The Rise of Streaming is Revitalising the Industry 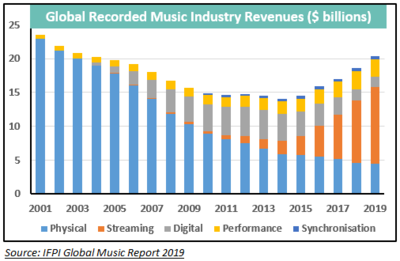 Beginning in the early 2000s, the music industry was plagued by piracy which caused significant value destruction and illegal downloading of music – leading to a 15-year period of declining revenues.

However, the introduction of streaming platforms such as Spotify, Apple Music, Pandora, YouTube Music and others is revitalising the industry.

Streaming Generates Income Every Time a Song is Played
Revenues from streaming are replacing physical purchases and downloads at a rapid pace. In addition, a key driver of streaming revenue growth is the fact that royalties are triggered from streaming every time a song is played regardless of whether users have a paid subscription or just utilise a platform’s free offering.

Spotify, for example, tallies up a ‘stream share’ each month – the proportion of streams for each song of the total number of streams in that month – to determine how much royalties are paid. The split of the royalties depends on various contracts with administrators, record labels, etc, while Spotify also keeps a cut.

So, a key consideration for future growth in the industry is the consumption of music. The convenience of the relatively low-cost legal streaming platforms is leading to a rapid transition from the era of piracy and illegal downloading and with penetration into new markets, the amount of royalty payments should continue to increase. Growth in subscribers has been strong and in 2019 alone, there was a 33.5% increase in paid streaming subscribers around the world. That said, subscriptions remain very low in comparison to the size of the addressable market.

Music revenues have been growing strongly since 2014 (7.8% compound per annum) driven by the rise of music streaming – with streaming now making up a significant portion of overall revenues in the music industry. However, global music revenues remain below the previous peak which was reached over two decades ago in 1999.

Streaming is the Catalyst for Further Growth

Technology has led to significant changes in the way we consume music – making it more convenient and affordable. The continued growth of streaming, along with other technology-led initiatives, is expected to provide significant growth opportunities going forward. These include: 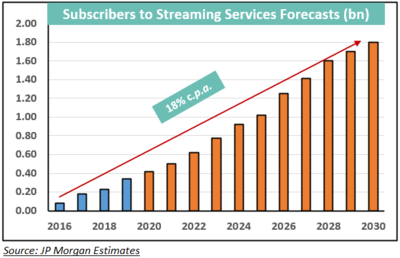 It is believed that significant long-term potential exists for emerging markets given the current low level of penetration – with the opportunity to develop into an important market. For example, in early 2020 Spotify became available in Russia for the first time.

The number of paid streaming accounts stood at 341 million at the end of 2019, but it is estimated that streaming platforms will continue to grow strongly – with some forecasting 18% compound per annum growth between 2016 and 2030, reaching 1.8 billion global subscribers to streaming services by 2030. 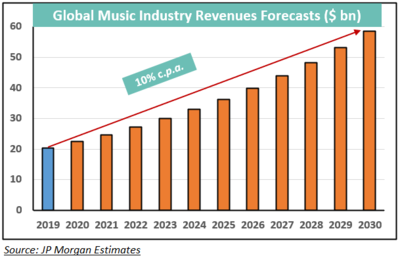 The Internet means some users (such as older generations) have increasingly started to consume music online whereas they may not have bought physical records or CDs, while we have already seen the adoption of music consumption through platforms such as TikTok and Peloton.

Considerable effort is also being made, through legislation and technology investment, to protect copyrights to avoid a repeat of the 2000s and, overall, the growth potential looks well underpinned from here.

Investment in Music Royalties Becoming Accessible
Recent lucrative music catalogue deals have broken down barriers in the industry and are paving the way for further similar deals going forward – with many artists previously being reluctant to selling copyrights. In 2020, the likes of Bob Dylan, The Killers and Stevie Nicks all sold their catalogues to eager investors.

The purchase of Bob Dylan’s catalogue by Universal Music highlights the company’s ambitions to broaden its portfolio in anticipation of a spin-off via an IPO in 2022. In addition, a successful example of investors entering the music industry has been the Michigan Pension Fund, which currently owns around 93% of Concord Music following an initial investment in 2010.

The trusts aim to acquire songs and construct a high-quality and diversified portfolio with copyright interests providing access to steadily growing royalties’ income streams. In turn, such funds currently offer an above average and growing dividend yield to investors. In addition, the growing demand for music catalogues can lift their values in the marketplace in time, offering some additional capital growth to investors in such funds.

With much-improved growth characteristics in the music industry and the above average predictability of the income streams, music royalties represent a new and exciting investment space. In addition, the low correlation of music royalty income streams to general economic activity provides some diversification benefits for investors at a time where non-risk assets are yielding next to nothing due to the current low interest rate environment.

We recently published a full research note on the Hipgnosis Songs Fund in the members’ area of the website. You can join our database for free monthly articles and more or you can join up as a member if you want to receive our weekly newsletter and website offering (full membership is €299 per annum). You can also avail of our 14-Day Free Trial. Just click the relevant link.