Warren Buffett once said, “The single-most important decision in evaluating a business is pricing power. If you’ve got the power to raise prices without losing business to a competitor, you’ve got a very good business. And if you have to have a prayer session before raising the price by a tenth of a cent, then you’ve got a terrible business. I’ve been in both, and I know the difference.”

The higher inflationary environment we are seeing at present is very much uncharted territory for many investors and businesses, in the developed world at least. Company earnings calls and investor updates are filled with questions about whether management can push through price increases and, if so, how much can be passed through and how quickly.

As Buffett puts it, pricing power is the ability to raise prices in confidence without losing business. This pricing power tends to come from a company having a sustainable competitive advantage of some sort, be it strong brands, cost leadership, network effects, etc. In this latest Featured Article, we take a look at some of the world’s largest companies and how they have demonstrated their pricing power for many decades.

Disney is one of the world’s most recognised brands and its content is a unique asset built up over the last 100 years which cannot be replicated. And its use of characters, movies and stories is what attracts millions of visitors to its theme parks year after year. When it first opened its gates in 1971, Disney World in Florida, which comprised one theme park, attracted 10.7 million visitors. In 2019, prior to the pandemic, Disney World’s four theme parks all ranked in the top 9 on the list of the 25 most visited theme parks in the world and combined the four parks had 58.8 million visitors. 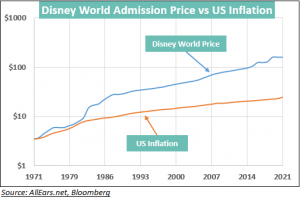 We have taken US inflation as an index using the annual inflation rate which has increased by 4% compound per annum since 1971.

In comparison, Disney has increased the price of 1-day general admission at its Florida resort at nearly double the rate of inflation – with prices growing by 7.9% compound per annum from $3.50 per person in 1971 to $159 per person today (during peak times). With visitor numbers increasing every year, I think it is fair to say that the higher admission prices have not discouraged its guests. In other words, Disney’s sizeable competitive advantages have given it significant pricing power.

What is also interesting about this is that the 1-day price shown in the chart provides access to only one of Disney World’s four theme parks – no hopping between parks or access to its two water parks. Same-day access to all 4 theme parks can cost in the range of $360-405 per person, while one can pay an extra $50-60 to save time waiting in line at the rides and attractions. And, of course, none of this includes Disney’s unique merchandise which can be found at its 50,000 square foot World of Disney shop in Disney Springs. In other words, while the price of 1-day general admission has risen by 7.9% per annum, the amount spent per person has likely risen by a much higher rate.

I had the chance to experience first-hand the power of Disney’s brand when I visited Florida in December 2021. Queues of shoppers looking for Disney World’s limited edition 50th anniversary merchandise and 100-minute wait times for popular attractions in Magic Kingdom failed to deter visitors – “The most magical place on earth”.

Diageo is a London headquartered multinational alcoholic beverage company which owns some of the world’s most popular brands, none more famous in Ireland than Guinness. Guinness was first brewed in Ireland over 260 years ago but is now brewed in around 50 countries and is sold in over 120 countries worldwide.

Today, Guinness is the best-selling alcoholic drink in Ireland and accounts for roughly a quarter of all beer sales in Ireland. That said, the UK is the largest drinker of Guinness while Nigeria is third (after Ireland), and Guinness estimates that over 10 million glasses of Guinness are consumed every day around the world. To highlight the strength of the Guinness brand we have taken the price of a pint of Guinness in Ireland since 1969 and compared it to the rate of inflation in the country over the same period. 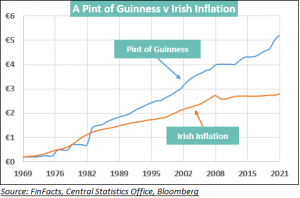 Guinness is recognised worldwide and its popularity can be seen at its Storehouse at St. James’s Gate Brewery in Dublin which has become one of the country’s top tourist attractions over the last two decades. Since first opening for tours in 2000, it has received over 20 million visitors. In 2019 alone, the storehouse had 1.7 million visitors, more than the iconic Cliffs of Moher in Clare.

With its iconic golden arches logo, McDonald’s is the world’s largest restaurant chain by revenues and it is estimated that the group serves over 69 million customers on a daily basis across 100 countries worldwide. Probably most famous on its menu is the McDonald’s Big Mac which was debuted in Pennsylvania in 1967.

Such is the popularity of the Big Mac, the Economist began the Big Mac Index in 1986 to track to price of a Big Mac across the world – to guide whether currencies are at their right level based on the theory of purchasing-power parity. We have used the data over the years to compare the price of a Big Mac in US dollars in 1986 and today. 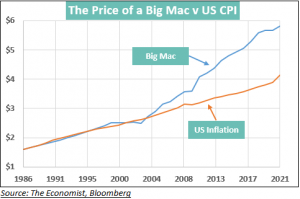 In 1986, a Big Mac cost a customer just $1.60. Today, the same hamburger costs $5.81 which indicates a 3.8% per annum increase in price over this 35-year period. And, similar to Disney and Diageo, these price increases have been at a higher rate than inflation – which increased by 2.8% annually over the period.

This ability to raise prices at a faster rate than inflation has also accelerated during the years – likely as the strength of its pricing power increased. For example, the price of a Big Mac has risen by 4.1% per annum since 2000, with inflation growing at 2.4% annually over this same period.

These companies have not come without their challenges through the years. McDonald’s suffered stagnant growth in the late 1990s and early 2000s reflecting more health-conscious consumers, lack of innovation and out-dated restaurants. Slowing growth in China and the developed markets impacted profitability for Diageo between 2013 and 2015. Disney’s parks business can be cyclical, evident from a 25% decline in income in 2009 while cord-cutting, which has been ongoing since the early 2010s, has impacted its TV Networks.

In addition, all three companies were significantly impacted by the CV-19 pandemic in different ways – the temporary closure of McDonald’s, disruptions in Diageo’s on-trade channels in the hospitality and pub sectors and the closure of parks for Disney. And, even more recently, there has been increased investor concern over subscriber growth for Disney+, amplified by Netflix’s recent slowdown in subscriber growth.

However, finding high-quality companies with clear pricing power is rare and, in our view, Disney, Diageo and McDonald’s are examples of companies with excellent business franchises and a competitive advantage that gives them pricing power. Inflation is running at over 8% annually in both the US and Europe and it is highly probable that these companies can manage through this environment. However, just as importantly, the pricing power afforded by these companies should allow them to continue to increase prices above the rate of inflation for many years to come – creating value for the business which, in turn, benefits long-term shareholders.

In the members area of our website, we provide full research notes on Diageo, McDonald’s and many more, and we are looking to introduce full coverage of Disney in the coming weeks as it is possible that recent share price weakness has presented a buying opportunity. In addition, we provide regular updates on the stocks/funds we cover through our Weekly Newsletter.