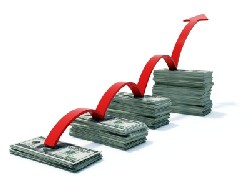 As the saying goes – ‘you can’t make a silk purse out of a pig’s ear’. Similarly, regular investing in the stock markets is not a magical solution to severe and prolonged bear markets. Nonetheless, regular investing is effective at controlling risk, limiting the damage from a severe downturn in markets and ensuring that you are positioned to benefit when markets recover. Many investors sell out of markets during prolonged declines only to miss the initial recovery. Undoubtedly, many private investors were on the sidelines when the dramatic 2009 recovery in stock markets got underway in March 2009. 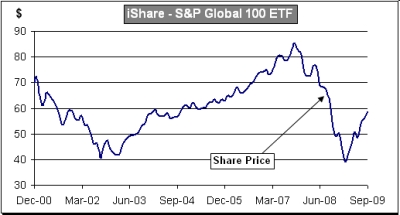 The first chart opposite highlights that the price of this ETF (fund) started at just under $70 in December 2000 and is currently (23rd Sept 2009) trading at just under $59, representing a loss of 16% over this 9-year period. Had you invested a lump sum into this ETF at the beginning of December 2000, your investment would have declined by 16% by end September 2009. It has indeed been a disappointing decade for investors.

The second chart further down highlights that by investing $500 each month into this ETF over the period an investor would have invested a total of $53,000 into the fund by September 2009. And by that time, that investment was worth $52,900 representing only a minor loss over the period. These returns exclude dividends income. 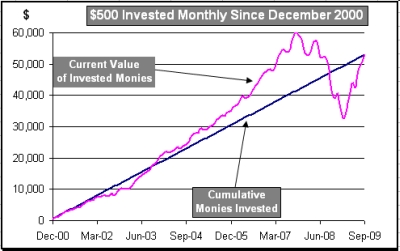 The point is that although there has been no capital gain for the investor, he/she has not been knocked out of the game either and fully participated in the recovery since March 2009. Yes, the investor would have been modestly better off if he/she had left the money on cash deposits over the period but, in the context of one of the worst periods for investing in the past century, the situation could not be considered fatal either.

More importantly, on the assumption that global stock markets recover further from here and the share price of this ETF rises back to where it started in December 2000 (i.e. $69.7), which requires a further 18% rise from here, then the value of the investor’s holding will rise to $63,000 for an eventual gain of $10,000 over and above the amount invested $53,000 even though the price of the ETF is only back to the strating price of $70.

So how – you might ask – can an investor make a positive return if the price of the fund (or ETF) was essentially flat over the period (which it would be if the price simple recovered to the strating price in Dec 2000) ?

The reason is that by adding monies to his/her investment programme in good times as well as in bad times the investor achieved an average buying price of $60.6 over the period, some 13% below the initial price of the ETF in December 2000. While one might think that the investor would have got the average price over the period, he/she in fact got the weighted average price. For example, $500 buys 7.2 shares in the fund when the price of the ETF was $69.7 at the start. At $40, however, the investor gets 12.5 shares in the ETF for his/her same $500. 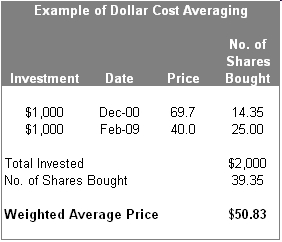 investor needs it to recover by only 27% from $40 for his/her investment to break-even. That is dollar cost averaging and the following tables outlines the figures in better detail.

Th one caveat we should add, however, is that in a world of deflation or constantly falling asset values, like Japan since 1990, then regular investing will not be effective. The underlying assumption for regular investing to work is that the market recovers over time. 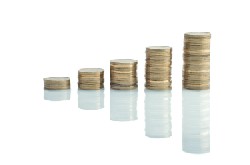