Risk Is Rising In This Gold Bull Market

I first covered the gold theme in 2003, and in those early days a $10 move in the gold price was big news. Progress was generally slow following two decades of falling gold prices in the 1980s and 1990s, which had burnished gold from investors’ memories.

Gold was $35 an ounce in the mid-1930s and was fixed in price against the dollar until the late 1960s. At that time however, the US had started to issue a lot of new dollars to finance the Vietnam War among other programmes, and it could no longer afford to offer an ounce of gold for only $35 dollars. At $35 an ounce in the late 1960s, Chart A highlights that gold was substantially undervalued against the inflation-adjusted gold price, which represents what the gold price would have been had it simply kept pace with inflation from the 1930s to the late 1960s. The result, in the late 1960s, was a devaluation of the dollar against gold and gold shot up in value against the dollar. 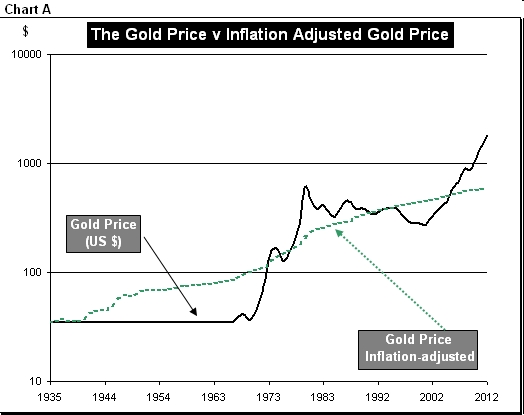 Roll forward to the late 1990s, and following two decades of generally declining prices, gold became undervalued once again against the long-term inflation-adjusted price. This time around, persistent trade and current account imbalances between the US, China and Asia from the mid 1990s became a principal source of new dollar supplies. In the old days, if you had a trade deficit – an excess of imports over exports – you had to settle your bills with gold. Gold would flow out, reducing the central bank’s reserves, which, in turn, forced the availability of credit and the economy to contract until domestic consumption and the trade balance reached equilibrium, once again. These days, economies seem happy to continue financing each other by accepting paper money as payment even though the debtor country – principally the US – keeps debasing its paper currency by printing more of it.

By the late 1990s, the conditions for a new gold bull market were in place – gold was undervalued and the supply of dollars was on the increase once again. An additional positive is that there has been little opportunity cost to holding gold with interest rates so low. In fact, short-term interest rates are currently negative after inflation.

We must remind ourselves that gold is the only currency that is an asset. All other currencies are promises to repay a liability. There is no risk that gold can be debased as the supply of gold cannot be increased any faster than it can be mined out of the ground, and new supplies are scarce. 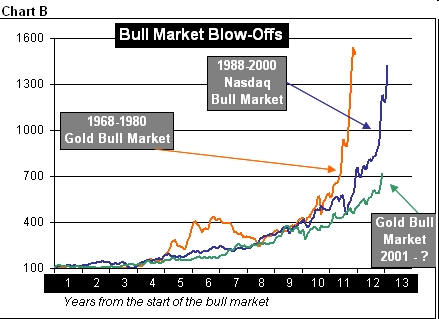 The pertinent question at this stage is: how far along are we in this gold bull market? There is increasing media coverage of the gold theme and the signs of wider participation by the public are increasing.

Chart A is a healthy reminder that all assets have an anchor of value. With house prices, that anchor of value is average incomes – what people can afford. It is a pity we forgot that. The gold price is now a long way above the price it would be had it simply increased in line with its long-term anchor, inflation.

Gold is no longer a cheap asset. Nonetheless, the lack of value in an asset does not halt a bull market, and Chart B is a reminder of the potential for an explosive price rise ahead. It compares the blow-offs that occurred in the 1970s gold and 1990s technology bull markets. Both lasted on average ten to twelve years and ended in price acceleration. It might be just a coincidence but this current gold bull market is entering its second decade and the price rise appears poised to similarly accelerate.

So, we have an asset that now looks expensive compared to historical inflation, offers no income but where new supplies are strictly limited and investment demand is increasing. This suggests to me that the gold price is destined for higher levels but, like Irish housing in 2003 – overpriced and going up – the risk is also rising fast. I believe that if you buy today, you had better sell it on at some stage. That, of course, is closer to speculation than investment.