Seven Cures For A Lean Purse: Lessons From ‘The Richest Man In Babylon’

To save a lump-sum of capital from which you can earn an income that covers your annual outgoings is to achieve financial freedom. Anyone in society can achieve this, but it takes a plan and the discipline to stick to that plan.

In a remarkably simply and entertaining book, The Richest Man in Babylon by George S. Clason, published in 1926, Clason communicates the core messages of saving and investing. The ideas making up the book were initially published as a series of informational pamphlets distributed by banks and insurers to the public in the US in the early 20th century. Eventually a number of these pamphlets were collated in 1926 and published as a single book. The book remains in print today (click the link above or Google it).

Through ten chapters, the book recounts a series of financial parables which are intended to explain the fundamentals of sound savings and investment principles to readers. The characters throughout the book are typically traders and merchants (self-made men) who live in the Mesopotamian city of Babylon, and who explain the secrets of their wealth to poorer men and slaves who wish to better their lot in life.

The city of Babylon was famed in its time as a jewel of the Mesopotamian empire, and was a city without natural resources surrounded by an arid valley. And yet, the city thrived as a result of human innovation and ingenuity. It is no accident, then, that the book is set here, as the author views the city as an “outstanding example of man’s ability to achieve great objectives, using whatever means are at his disposal. All of [Babylon’s] riches were man-made.”

Although the book is somewhat dated today, it is an easy read and does an excellent job of explaining sound savings habits in a memorable way.

For this article, we thought that it would be interesting if we took an extract from the third chapter of the book, and commented on what we think are the most important points to note.

Chapter 3: Seven Cures for a Lean Purse
In this chapter, King Sargon returns from a war and laments the poor state into which his city has fallen. Prior to the war, he had initiated a series of public works (infrastructure projects) which brought wealth to all citizens; however, in the time since the works had been completed, all of the wealth created had ended up in the hands of a few rich men such that the gap between poor and rich had become intolerably wide.

The king’s chancellor warns the king that “one may not condemn a man for succeeding because he knows how. Neither may one with justice take away from a man what he has fairly earned, to give to men of less ability.” Discarding then the idea of wealth redistribution as a solution, the king summons to him Arkad, the richest man in Babylon, and the two men confer. Consequently, the king asks Arkad to lecture at a school for teachers, that each teacher might be trained in the ways of finance and could spread these teachings across the city. In this way, the citizens of Babylon could learn to make themselves wealthy and thus reduce the city’s wealth inequality.

Before a seminar of one hundred men, Arkad divulged the seven secrets of wealth that he had learned from a lifetime of saving:

[Note: We have edited the text slightly for readability.] With these seven cures established firmly in their heads, the one hundred pupils of Arkad were dispatched to the four corners of Babylon to teach the citizens the alchemy of financial success.

What We Took from the ‘Seven Cures’
It is, without a doubt, the first rule – that investors should set aside 10% of their income – that is the most important. This rule supersedes all other rules; it is a prerequisite to financial success and forms the keystone of any good savings programme.

This rule takes primacy over all other rules: for example, rule number five states that people should own their own homes – but this means being able to afford the mortgage after you have already saved 10% of your income, not before! It helps to regard mortgage interest as being part of the expenditures in rule two – if you can’t afford to pay the mortgage and other living expenses out of 90% of your income, then another expense has to be cut somewhere else. Saving 10% (or more, if you can afford it) is essential and not a sum to be negotiated with each year depending on how much you wish to spend. 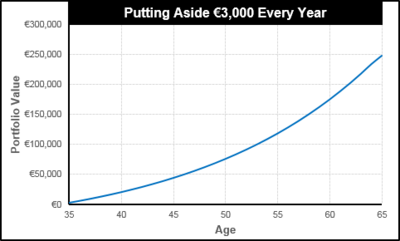 How much difference can saving just 10% of your income make? A surprising amount is the short answer, and the chart on the right demonstrates this point clearly. A 35-year-old saver earning the average wage in Ireland (€37,000, or €29,450 after taxes) can put away c. €3,000 each year.

If this grows at an average rate of 6% per annum, this investment will turn into €247,000 by age 65 – in other words, for total contributions of €90,000, a person can multiply their money 2.7 times before even factoring in lifetime growth in wages or higher contribution rates.

Of course, setting aside 10% is just the start: to achieve this 6% growth, an investor also needs a solid plan which protects against undue risk, excessive costs, and emotional biases. The need for a solid plan is covered in rule four which, in our opinion, is the second-most important rule. Even if a person just studies rules number one and four, we would be satisfied that they have mastered the fundamentals of saving and investing, and will make no serious error as they move forward.

It is important to protect your portfolio from losses stemming from undue risks, and investors who feel that they are ill-equipped to do this – whether due to lack of time, interest, or understanding – should consider “securing the advice of those experienced in the profitable handling of gold“, or financial advisers who can help to craft investment policies that are suitable for each client’s ability and willingness to assume risk in order to generate returns. Education can be particularly helpful and we at GillenMarkets have been running our 1-day investment training seminars since 2005. Click the link for details.