Sterling in an Historical Context 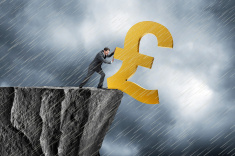 In this Featured Article, we take a look at sterling in an historical context. Emotions often steal the media headlines in time of crises, so it often helps to stand back and gather some facts. We believe we will better serve subscribers if we provide you with unbiased facts that Elaine has gathered rather than attempting to offer you our opinions.

The first Chart highlights the Sterling Trade-Weighted Index. Rather than looking at the sterling/euro exchange rate or the sterling/dollar exchange rate in isolation, a trade-weighted index measures the performance of a currency against the basket of currencies that it does most of its trade with. In sterling’s case, the UK’s major trading partners would be the Eurozone (48% of trade – i.e. the euro) and the US (18% of trade – i.e. the dollar) with a plethora of other countries/currencies making up the balance.

The Chart is revealing and highlights that sterling recently made a low hit on two other occasions over the past 25 years. 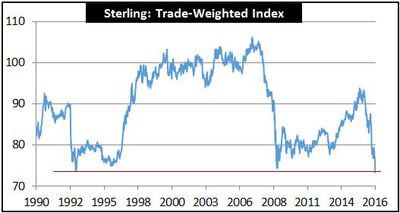 The other two occasions were in 1992 when sterling fell out of the ERM and in late 2008 when the Bank of England signalled its intention to weaken sterling in response to the Global Credit Crisis. This week, sterling hit a similar low as investors reacted initially to Brexit at end June and, more recently, to Conservative Party comments, which investors interpreted as raising the probability of a ‘Hard Brexit’.

If history is our guide, then sterling may already have bottomed this week. Of course, there’s no shortage of investment strategists announcing that sterling is going to parity against the euro (i.e. 1-1). Extreme views tend to grab the media headlines, but the reality is that investment strategists know little more than the rest of us. A relevant question is: is this crisis worse that the preceding two crises for sterling? The simple answer is that we don’t know! 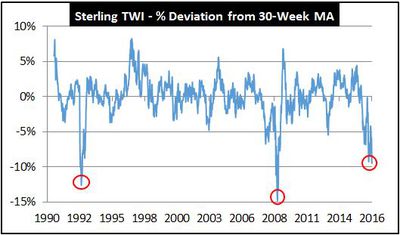 History also teaches us that markets are emotional, that they react violently to sudden negative news (Brexit this time around), but that they tend to discount the worst fairly quickly. The next Chart and Table provide you with some relevant statistics.

The second Chart measures the percentage deviation of the sterling trade-weighted index against its own 30-week moving average. In effect, what this measures is the speed or pace of decline. When bad news arrives unannounced, and investors are selling together, the price often cascades downwards in a frenzy of selling. This is referred to as ‘Capitulation’ and often marks the bottom, or the start of a bottoming process. The Chart suggests that we have just witnessed such an event, although the pace of decline this time around has not, yet, been as fast as in 2008 or 1992.

Inevitably, there’s an element of subjectivity in our analysis. The crises-start-dates are where we deem the crisis to have started. In 1992, it’s straightforward as sterling’s exit from the ERM was announced in early September 1992. In 2008, we took sterling’s TWI value just prior to the announcement of the Lehman Brothers bankruptcy. This time around, we took sterling’s peak TWI value in mid-June just before the Brexit vote.

The table highlights that the current decline in sterling’s TWI is less than occurred in the two previous crises. In addition, as the second chart highlights, the speed of decline was not as fast as in 1992 or 2008. So, there’s a case to be made that we have not yet seen the bottom. On the other hand, the duration of the current crisis is already as long as the previous two crises and the sterling trade-weighted index (at 0.905) is now back to just below its 25-historical low. On balance, we feel that the case for sterling having bottomed last week is stronger than the case against.

On the assumption that sterling is at, or close to, the bottom, the table also highlights the performance of sterling from the bottom on a 1-month, 3-month and 6-month basis thereafter. We hope subscribers find the analysis useful, and that it assists you in making investment and/or business decisions from here.