In this Featured Article, we re-examine the case for cryptocurrencies in a world swamped by debt. Today, global debt is circa $300 trillion representing 350% of global GDP, and almost double the level entering the Global Financial Crisis in 2008. Knowing which assets can protect an investor against the dangers embedded in such debt levels is probably today’s number one issue.

Cryptocurrencies have certainly caught the imagination of investors in the past few years. There’s nothing particularly new in a digital currency – after all, most people are well used to paying for goods and services with credit and debit cards both of which are digital mediums of exchange.

Traditional credit and debit cards facilitate payments electronically within the regulated global banking system. But the plastic card itself has no value, even though it facilitates the execution of transactions and the transfers of money. I see parallels between the humble plastic debit/credit card and cryptocurrencies. Straight off, then, you kind of know that I’m a sceptic!

Nonetheless, the concept that private citizens can by-pass the traditional banking system and trade in a currency outside the control of authorities has great attractions for cryptocurrency fans. 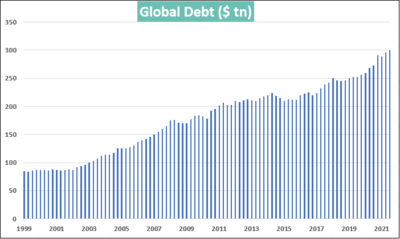 There are no physical bitcoins, only balances kept on online public ledgers that anyone has transparent access to, that – along with bitcoin transactions – are verified and protected by a massive amount of computing power. In other words, the underlying blockchain technology facilitates instant payments or transfers of value independent of banking systems.

Trying to understand whether bitcoins are indeed a new form of money might be better approached by examining what constitutes money. Sound money should act as both a medium of exchange and a store of value, so let’s examine bitcoins in that regard.

As far back as 330 BC, Aristotle, the great Greek philosopher, defined the five characteristics of sound money as durable, divisible, convenient, consistent, and has use value in and of itself.

Bitcoins are probably durable. They are certainly divisible, consistent, and they are convenient, so long as you have Internet access and that others are also willing to transact in bitcoins with you.

However, as a medium of exchange, transacting in bitcoins has proven to be clunky. The verification process in settling transactions is slow and expensive. In addition, the bitcoin price is volatile, so that, to date at least, they have not won the crowd over, and very few transactions in the global economy settle using bitcoins.

The bigger question is: are bitcoins a store of value? Similar to gold, bitcoins don’t generate any income, so the inevitable question arises as to how to place a value on them.

In gold’s case, it fulfils not just the first four of Aristotle’s rules for sound money but also the critical fifth; gold has an alternative use value. Gold has not just been used as money for 5,000 years, it has also been used as jewellery. And in more recent times gold has been in increasing  demand for its industrial applications.

It currently costs circa $1,055 on average to get an ounce of gold out of the ground and when you add on the miners’ profit margin it is easy enough to argue that a base price for the ancient metal of kings should probably be in the order of $1,300 an ounce. Gold’s intrinsic value is derived from its use as jewellery and in industrial applications, even if it was never again used as money. 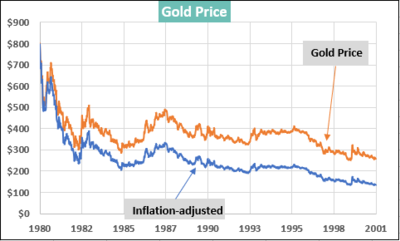 And I consider this an important caveat. Over the years gold’s use as money has often wavered. As a recent example, from 1980 to 2001, investors and central banks no longer bought gold for its ‘store of value’. And the gold price spent those 21 years in the doldrums losing circa 70% of its value in absolute terms from the peak price of over $800 an ounce in January 1980 to circa $255 an ounce in early 2001. After inflation, the lose in real value was greater still at an estimated 83%. Over the same 1980 to 2001 period, most other assets – equities, property, bank deposits – all gained substantially in value. But at least an investor in gold knew that there was a base value for gold, its intrinsic value, the cost of production for its use as jewellery and in industry.

Bitcoin and other cryptocurrency fans have to be able to answer the same question; what gives them value? In my view, it’s not enough to say; ‘the limited supply’. In any case, we can surely all agree that while there may be a limited supply of bitcoins there is surely no limit to the potential supply of cryptocurrencies in general.

If you come back in twenty years, there’ll be a price for your gold, and over the millennia, due principally to the fact that new gold supplies have been limited, the gold price has matched inflation. It has acted as a store of value.

And gold has been a better store of value than most paper currencies throughout history. Yet, as the supply of gold cannot always be increased at the same pace as global trade expands, there has never been enough gold around to facilitate the settlement of faster expanding global trade. Gold is an excellent store of value, but it has never been an ideal medium of exchange.

And gold’s limitations over the years as a functioning medium of exchange is the core reason for the development and acceptance of paper currencies, and governments’ support for them starting in the late 18th century.

People have traded with each other in goods and services since time began. Paper money and credit facilitate trade, and to be accepted as payment each must be trusted and have intrinsic value. We receive payment for our goods and services, and we lodge our payment into the banking system. We trust the banks to safeguard our money.

Intrinsic value for paper currencies comes from their ability to pay interest and, thus, to provide a return to investors that competes with returns available from other assets – such as property or equities.

Believe it or not, the risk averse saver in society, that person who saves his/her money in bank deposits, is entitled to earn an income that is above inflation as compensation for the risks involved. Those saving in bank deposits will only do so over the long-term if they are rewarded for the risks that inflation rates outpace deposit interest rates, and that reckless bank lending imperils their capital (that risk crystallised in 2008).

But what backs paper currencies and underpins their intrinsic value? Governments, of course! A sound banking system and a country’s currency is underpinned by a government’s ability to raise revenue through taxes, and not just today but also into the indefinite future. Paper money in a trusted banking system is both a medium of exchange and a potential store of value.

However, as paper money can be created at will by both banks and governments (via central banks), not all paper currencies have acted as a store of value; think of the German Reichsmark after WW1 and, more recently, the Argentinian peso, the Zimbabwean dollar or the Venezuelan bolívar – all worthless as a store of value after their respective governments spent recklessly and printed money in huge quantities to try and pay for that spending.

In summary, gold has proven to be an excellent store of value over the millennia, but it has never been an ideal medium of exchange. Paper currencies, backed by governments, were introduced in the late 18th century to overcome gold’s limitations as a medium of exchange. And paper currencies have done a decent job as mediums of exchange by expanding in supply at a rate that facilitates the rise in global trade, but they have never been an ideal store of value.

Cryptocurrencies are potentially a new medium of exchange outside the traditional banking system but without an alternative use value, or intrinsic value, it’s a leap to far for me to consider them a store of value.

Today, the global economy has $300 trillion of debt representing 350% of global economic output (GDP). That’s twice the debt levels that existed going into the Global Financial Crisis in 2008. Interest rates must stay low (how low, I simply do not know), so that interest costs do not overwhelm governments’ budgets, a development that has the potential to lead to insolvency or significant currency devaluations.

The value of all existing above-ground gold supplies is estimated at circa $12 trillion, a relatively small sum compared to the amount of global debt outstanding. Gold appears like a safe asset to own in such a debt-laden environment. So, too, are good quality properties and good quality businesses. Nothing that I understand, or have read, about sound money has convinced me that cryptocurrencies are worthy of the same consideration.