The seasonally strong period for the gold price is now upon us and, at the time of writing (4th Sept), the price has duly obliged with a further attempt to push decisively up through the $1,000 an ounce level. After a record breaking eight-year bull market from a low of $255 in 2001 gold’s financial attributes are now widely appreciated. The question now is – can gold sustain an advance above the psychological $1,000 level? 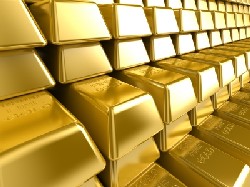 Gold’s Remarkable Physical Attributes However, a quick review of gold’s physical attributes is in order, as they are equally remarkable and over the millennia have been central to its financial attractions.

Gold is the heaviest metal, it is virtually indestructible and its melting point is 1064 degrees Celsius. It is the most stretchable pure metal known to man – a single gram can be crafted into a sheet one metre squared which is so thin that the sun can shine through. It does not oxidise (rust) in air or water, it has no taste in its purest form and is an excellent conductor of electricity. Its physical beauty has seen it used as jewellery for thousands of years.

In terms of its geological rarity, an average tonne of gold ore yields only 6 grams of gold. That is six parts to a million. Its durability and rarity make it valuable and its density allows significant wealth to be stored or transported with relative ease. For these reasons, gold has been an accepted form of money for over 5,000 years.

Gold produces no income but then it does not need to as it has no liability (debt) against it, unlike paper currencies which are backed by nothing but government debt. Said another way, gold does not produce wealth. Rather, it protects wealth. Hence, it should not be compared to assets such as shares or property. It is the ultimate alternative currency to paper money.

Three Gold Bull Markets in the Past Century

There have been three gold bull markets in the last one hundred years, one lead by deflation in the 1930s, one by rampant inflation in the 1970s and the current one lead by competitive currency devaluations which gradually destabilised the global financial system. All three gold bull markets have a common theme of a substantial increase in the supply of money in circulation.

The balance of demand and supply, of course, will determine where the gold price goes in the near term. On the supply side, annual production of gold is down and is adding only between 1-2% per annum to existing supplies. Technology may have improved but regulations have become stricter and the global credit crisis of 2008 has impacted funding even when deposits are ready for commercial production.

On the demand side, several factors interconnect. Firstly, the largest source of gold demand is for jewellery and industrial uses. With the global economic downturn, demand from this area has understandably fallen.

Secondly, central banks have traditionally held gold as a financial asset in reserve along with a variety of other assets. Hence, they should be a source of ongoing demand for gold. But, since the mid 1990s, central banks have been net sellers of gold choosing instead to build up reserves of other paper currencies, particularly dollars. 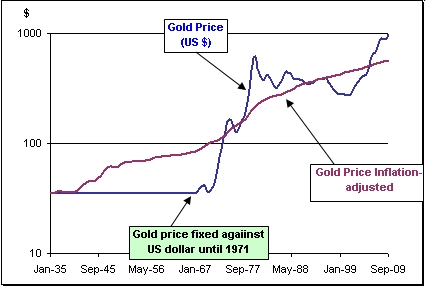 Thirdly, investment demand for gold in the past several years has more than plugged the gap left by the central banks and the downturn in industrial and jewellery usage. And as investment demand as a percentage of over all gold demand remains significant below 1980 levels (the peak of the last great gold bull market) we can assume that invetment demand is likely to continue rising from here.

Competitive currency devaluations are reflected in global trade imbalances and fuel growth in the money supply. In addition, efforts by the global central banks to offset the threat of deflation increase the likelihood of further money printing.

Investors can avoid holding currencies where central banks are increasing the supply at too fast a rate by switching into gold where the growth in supply is only 1-2% per annum. A bonus is that the current cost of holding gold after inflation is extremely low. And that is the nub of the current gold bull market.

A recovery in the global economy should lead to a recovery in industrial and jewellery demand. And if central banks gain any sense, they may start increasing their reserves of gold rather than depleting them (and follow China’s lead).

In short, the demand/supply outlook appears overwhelmingly in favour of higher gold prices in the short term and a decisive break above the $1,000 level is highly likely, in my view. For the nimble trader an opportunity is knocking.

For the investor, who should be more focused on the value on offer, the picture is not so clear. Gold tracks inflation in the long term and the accompanying chart suggests that the gold price is ahead of its fundamentals on that basis. Either that, or inflation will have to sky rocket from here to justify current and higher prices.