Understanding the direction of markets is about determining the balance of demand for shares against the supply. When demand is outstripping supply the markets are set to trend upwards and vice versa. As Charles H. Dow, the original editor of the Wall Street Journal, put it over 120 years ago in January 1901 (source: Dow Theory for the 21st Century, Jack Schannep, 2008):

“A person watching the tide coming in and who wishes to know the exact spot of the high tide, sets a stick in the sand at the points reached by the incoming waves until the stick reaches a position where the waves no longer reach it, and finally recede enough to show that the tide has turned. This method holds good in watching and determining the flood tide of the stock market.

The average of twenty stocks is the peg which marks the height of the waves. The price waves, like those of the sea, do not recede at once from the top. The force which moves them checks the inflow gradually and time elapses before it can be told with certainty whether high tide has been seen or not.”

It’s a wonderfully elegant quote and forms the foundation of a theory later attributed to Charles Dow and referred to as ‘Dow Theory’. The Dow Industrials Index consisted of just 20 stocks back in 1901.

Dow Theory – A US Stock Market Barometer
William P. Hamilton, the second editor of the Wall Street Journal, filled out many of the gaps in Dow’s theory in his book The Stock Market Barometer, published in 1922. It was Dow that formulated the theory that was later to be referred to as Dow Theory, and William Hamilton continued the use of this theory where Charles Dow had left off. Dow Theory has an excellent long-term record of ‘timing the markets’. Jack Schannep, author of Dow Theory for the 21st Century, has updated Dow’s theory for developments in markets over the past 70-odd years. Jack Schannep has his own newsletter The Dow Theory that is dedicated to his version of Dow Theory and those interested can subscriber directly to his newsletter.

At its core, there are three fundamental principles underlying the theory:

Dow Theory’s First Principle: Everyone’s view is in the market and their combined views are more powerful that any individual view. That being the case, the stock market itself tends to act as the leading indicator of what lies ahead for the economy and business. Many investors have problems with this, believing that their own – often intelligent – view should be right. But they fail to understand just how many variables are involved. A Galway subscriber posted me this YouTube Video in late 2013 with the title Wisdom of the Crowd. It’s an experiment in counting a jar of jellybeans and how the average guess is far more accurate than any one guess and neatly articulates my point above. It’s well worth looking at the video if you have time later. Just click the link or go the Featured Article dated Nov 2013. This is the reason why – to understand the likely future direction of the market – it is pointless reading newspapers or listening to the opinions of others. All those opinions are already in the market – expressed by buying or selling – and their combined actions are far more accurate in pointing the way ahead than any individual opinion. You just have to be able to read what the market is saying, and Dow Theory helps in that regard. 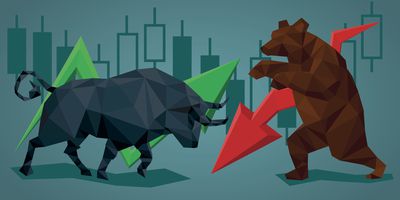 Dow Theory’s Second Principle: There are, simultaneously, three movements in progress in the stock market. The main trend is referred to as the primary trend and markets are generally either in an uptrend or downtrend, although ranging action is also possible, but rarely for long. In the midst of any primary trend there are the inevitable reactions against that primary trend, and these are referred to as secondary movements (or secondary reactions). These are deceptive and represented by sharp declines in a bull market and sharp rallies in a bear market. Eventually, a secondary reaction becomes more than that and results in a change in the primary trend from a bull market, an upward trending market, to a bear market, a downward trending market (or vice versa). Dow Theory has a set of rules for judging when the tide has turned from primary bull market to primary bear market (and vice versa). Concurrently with the primary and secondary movements of the market are the daily movements and they represent the third type of trend or movement. Daily movements are largely irrelevant and, generally, no worthwhile inferences can be taken from them. The primary trend is key and secondary reactions must be watched closely for their potential to lead to a reversal of the primary trend.

It’s a wonderfully simple, elegant theory. And its track record is good. It’s not a silver bullet for timing markets, but it does offer an intelligent and objective reading of what the market’s view is and, more times than not, it points to changes in the underlying market trend. For example, in November 2007, Dow Theory issued a ‘Sell’ signal well ahead of the major damage inflicted by the global credit crisis. Indeed, one might say that the market foresaw the global credit crisis. On the bullish side, on 23rd March 2009, Dow Theory signaled that the deep bear market was likely over. That was within two weeks of the bottom of that bear market. Few media commentators understood the implications of the change in trend at that time – the market was signaling better times ahead, and the market got it right! And where the US stock market goes, global stock markets tend to follow, so the technical indicator, Dow Theory, has huge relevance beyond the US stock markets.

This ‘Timing the Markets’ service is in addition to our normal service of providing research on individual stocks and funds that we recommend for purchase for sound long-term investing.

If you want to find out more about Dow Theory, its rules and track record and the other services that make up our Newsletter subscription then consider subscribing. There’s a 14-day Free Trial Offer using the same link.