Volatility In Markets: Danger Or Opportunity?

Stock markets around the world have been weak and volatile over the past several months, signalling that investors are worried about the future and the negative events it might contain. This increase in volatility is having an understandably unnerving effect on investors, but should we really be worried about it?

While volatility can be unsettling, it’s important to remember that stock markets aren’t necessarily riskier just because prices are swinging about in a volatile fashion. We like to highlight this point with a simple example shown in the next chart below. 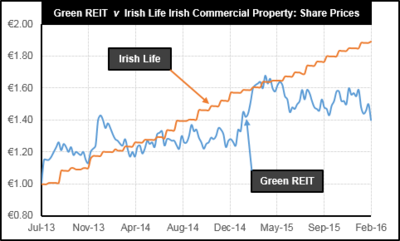 Since the two funds are broadly similar to one another in terms of asset exposure, we would expect their share and unit prices to increase in roughly the same fashion. And yet, the chart shows that the opposite is true.

The Irish Life fund’s price has risen in steady, measured increments while Green REIT’s share price has moved around in a very volatile manner – despite both funds owning a similar array of assets in the same geographical location.

While we would expect some differences in the movements of the two funds’ prices – since they aren’t exact replicas of one another – the difference in how the two share prices have acted is striking. Green REIT’s share price has been three times more volatile than Irish Life’s!

The difference, of course, is that Green REIT’s share price is publicly traded, while the Irish Life fund’s unit price is decided by a team of analysts who objectively value each property holding using fundamental data. As such, Green REIT’s price is subject to swings in emotions and investment flows that the Irish Life fund is sheltered from. The question one might ask is: does Green REIT’s weak share price lately reflect an increase in the risks associated with an investment in Irish commercial property? Clearly not. Hence, one has to conclude that the volatility reflects swings in sentiment.

General Thoughts on Volatility
This point can be extrapolated to the current volatility in stock markets: if we drew a chart of a company’s intrinsic value (or “real” value) against its share price, the value would most likely have barely budged while the share price would have swung in large arcs around the value.

Much of the time, increased bouts of volatility reflect shifts in investors’ emotions rather than cool-headed analyses.

For the especially brave among us who can take a long-term view, volatility like what we are currently witnessing often presents an excellent opportunity to buy the same quality companies at cheaper prices.