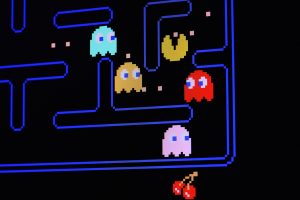 It was not until the 1970s and 1980s that video games began to rise in popularity, mainly through arcades. Atari, an American video game developer and home computer company, was responsible for a lot of the early success of arcade games, specifically its Pong game. This was followed by the highly successful Space Invaders game, which was first released in 1978 by Taito, a Japanese video game company. The most successful game of this era, however, was Pac-Man, released in 1980 and is estimated to have grossed over $2.5 billion during the 20th Century. Other popular arcade games during this era included Street Fighter, Virtual Racing and Mortal Kombat.

Although the first home gaming console was released in the early 1970s, it was not until the end of the 1990s that the console market surpassed arcade video games. Key to this was the release of the first PlayStation by Sony in 1994 which sold over 100 million units and the Nintendo 64 in 1996 which sold over 30 million units. Then came Microsoft’s Xbox in 2001. Sony and Microsoft have largely dominated the market ever since. The early success of the Nintendo Wii failed to maintain momentum as a lack of third-party games limited it attractiveness. More recently, however, Nintendo’s Switch console has been a big success – selling over 100 million units since its release in 2017. Nonetheless, Sony’s PlayStation 2, which was released in 2000, remains the most successful games console by units sold – selling over 155 million units worldwide.

Traditionally, the video games market operated as a product-based revenue model which lasted from the early 1980s to the early to mid-2000s. Consoles were sold in 5–7-year cycles while developers sold physical discs and cartridges through retailers (such as GameStop) to consumers who would play the games on consoles. Revenues were driven by the number of copies sold and would be skewed toward holiday seasons while rising development costs made it a hit-driven model and led to significant consolidation – with only a small number of publishers, retailers and platforms controlling the market. As such, revenues and profits were cyclical, lumpy, and largely dependent on the success of a console and the games playable upon it. 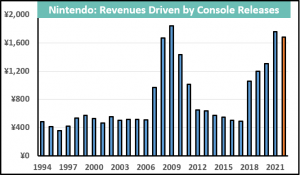 However, like so many industries, technology and digitalisation has completely changed the market and a transition to a service-based revenue model began in the mid-2000s and has led to a new era in video gaming. Consumers can now download games onto their devices directly rather than purchasing in-store (in-store physical purchases are still offered but have declined significantly). Gaming companies now offer subscription models, which users can purchase in order to access services such as database storage, free access to games, and exclusive perks and rewards. The ability to connect and play with others online has also brought a social aspect to the market.

Probably most significant, however, has been the rise of in-game purchases of extra content and services (microtransactions). Within games, consumers can now make various microtransactions to improve the game, characters, teams, etc. For example, in FIFA’s Ultimate Team, in-game transactions allow gamers to improve their team and compete online against some of the top online players. The transition to this model is highlighted by the fact that extra content and services represented 71% of revenues in 2021 for Activision Blizzard.

Companies are adapting as a result. Consoles are sold at a loss (although this has been the case for some time now), while video game developers are offering many high-quality free-to-play console games. At the expense of generating higher revenues from product sales, console makers and video game developers are attempting to increase their user base through subscription-based offerings while also benefiting from the rise of microtransactions.

Electronic Arts – the developer of popular sports games franchises such as FIFA, Madden NFL and NBA Live – recently launched EA Play, a subscription-based video game service providing members with early access to new games, rewards, discounts and exclusive content. Microsoft’s acquisition of Activision Blizzard reflects a desire to enhance the attractiveness of its own subscription service, Xbox Games Pass where a monthly fee offers users access to its suite of games, as well as exclusive perks and rewards.

A key problem for the old console model for Nintendo was that a console would build up a large user base, but each new console launch would require a rebuild of its user base. However, the Nintendo Switch has been an indicator of a transition away from this model – with some industry analysts comparing it to Apple’s iPhone model. Its Switch devices have already built a base of over 100 million users and future generations of devices will be compatible on the one platform. For example, a user that has built up an extensive library of games can bring this collection with them if or when they decide to upgrade to a newer Switch device. In addition, similar to others, Nintendo Switch Online (NSO) is the subscription service that provides access to both new and classic games, along with other perks and rewards. With a fully compatible gaming platform, a portfolio of high-quality games (both Nintendo’s and third-party) and the growing benefit of microtransactions, the Nintendo business model looks far more attractive today.

Ultimately, the goal of these companies is to build an offering of high-quality content which attracts a growing network of gamers into their ecosystem. The advent of the Internet and improved computing power has changed the industry from a cyclical, lumpy revenue model to one driven by subscriptions and micro-transactions. These types of revenues are recurring, sticky, highly visible, and higher margin – i.e. the revenues are of much higher quality, and thus also afforded a higher multiple by the market. Furthermore, the gaming market is exhibiting strong growth, driven by the continued growth in the use of the internet, the rise of cloud gaming, e-sports and changing demographics.

Lastly, we have just launched our Online Investment Training Course, which aims to teach users about the basics of saving and investing. It costs €169, has nine modules (average module duration is 35 minutes) and can be viewed/accessed from all devices. Click the link provided for details.